Minar-e-Pakistan in the lqbal Park, Lahore was constructed to commemorate the famous Lahore Resolution which on 23 March 1940, in which Pakistan Muslim League, the single representative political party of all Muslims of the India in its historic 34 annual session unanimously demanded the creation of a separate homeland for the Muslims of this sub-continent. The Minar is a blend of Mughal and modern architecture and has been very boldly designed. The foundation stone was laid on 23 March 1960 by the governor West Pakistan Mr Akhtar Hussain in the Minto Park, which was later renamed as Iqbal Park, after poet Dr Iqbal who first gave the idea of a separate Muslim country for the Muslims of the British India.

The minar was architectured by Naseer ud Din Mira’at Khan who was a graduate of St. Petersburg University and originally belonged to Daghistan, USSR. He came to Pakistan and married here. From 1953-58 he was consultant to the Government of Pakistan on construction and was the man behind the designing of Police Training College, Sihala, Qadaffi Stadium Lahore and many other buildings. It i s said that in early 1963,President Ayub Khan called Mr. Mira’at in governor house Lahore and took out fountain pen from his pocket and placed it vertically on the table and asked Mr. Mira’at that he wanted a monument ”

burj (the word he used)” like this to be build. The design approved by the President was built under the personal supervision of Mr. Mira’at by Mian Abdul Khaliq and Company. The Minar was completed on 31 October 1968 at an estimated cost of Rs. 7.5 million. The money was collected by imposing additional tax on the cinema and horse racing tickets.

The base of the tower is raised approximately 4 metres from the ground. It rises up to approximately 13 metres. forming a sculpted, flower-like base. From this point it tapers as it rises. The base platform is shaped like a 5-point star and it encloses crescent shaped pools.  The overall height of the monument is approximately 60 metres. It is constructed in reinforced concrete, all poured in-situ. The floors and walls are rendered in stone and marble. From base to some 181 feet height, concrete and steel has been used, while the top 16.5 feet portion is made of stainless steel to avoid it from corrosion. The lower portion / base is made of coarse marble, indicating the initial  rough days of independence, while walls and upper portion have smooth marble showing gradual development and prosperity. On the base, all around the Minar are ten marble slabs of seven feet tall and two feet in width, on with 99 names of Allah have been written. Other inscriptions include excerpts from the speeches of Mr. Muhammad Ali Jinnah, the founder of Pakistan related to ideology of Pakistan, in Urdu, Bengali and English, besides the National Anthem in Urdu and Bengali and a verse from Dr Allama Iqbal. Some Quranic verses (Surah Baqarah, Surah Al e Imran, Surah Myedah and Surah Ra’ad) have also been inscribed. On the main entrance “Allah o Akbar (Allah is the Greatest) and “Minar-e-Pakistan” are inscribed.

There are 324 stairs to go to the top, besides a lift. The first balcony is 30 feet high, second at 50 feet. There is a separate “Chabootra” abou 12 feet high some distance away from the Minar, on which Quranic aya “Allah al mashriaq wal maghrab” is inscribed. The resting place of Hafeez Jalandhari, the writer of the national anthem of Pakistan, is also in the courtyard of the minar. The Mianr was initially named “Yadgar-e-Pakistan” but was later rightly renamed as “Minar-e-Pakistan”. 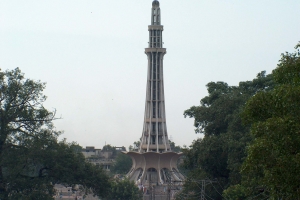 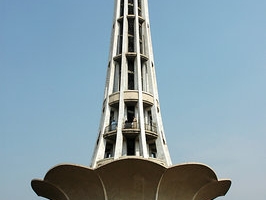 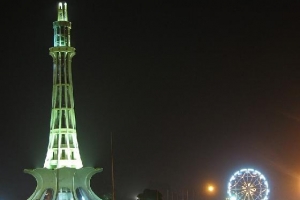 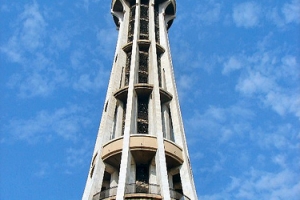 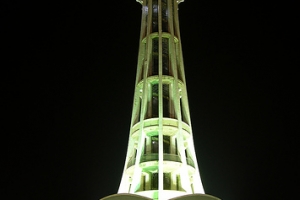 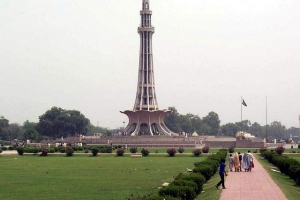 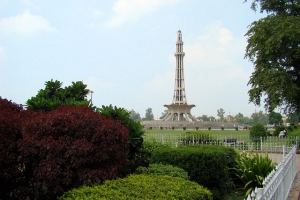 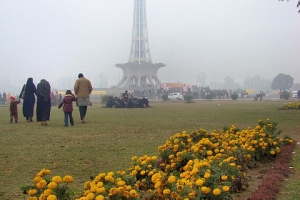 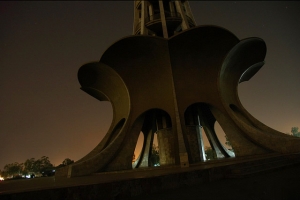 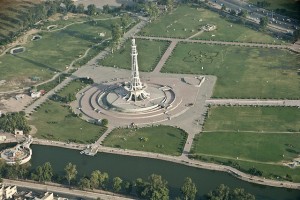 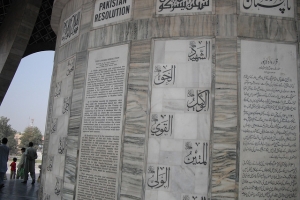 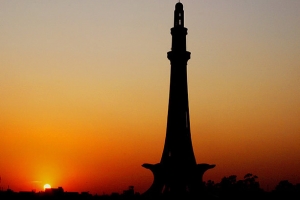 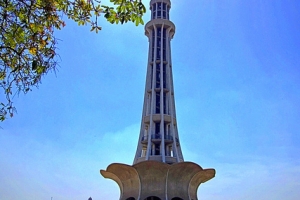 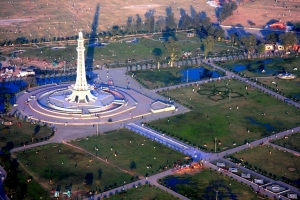 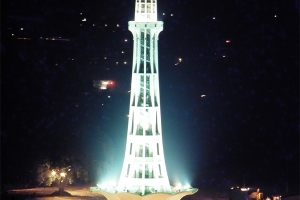