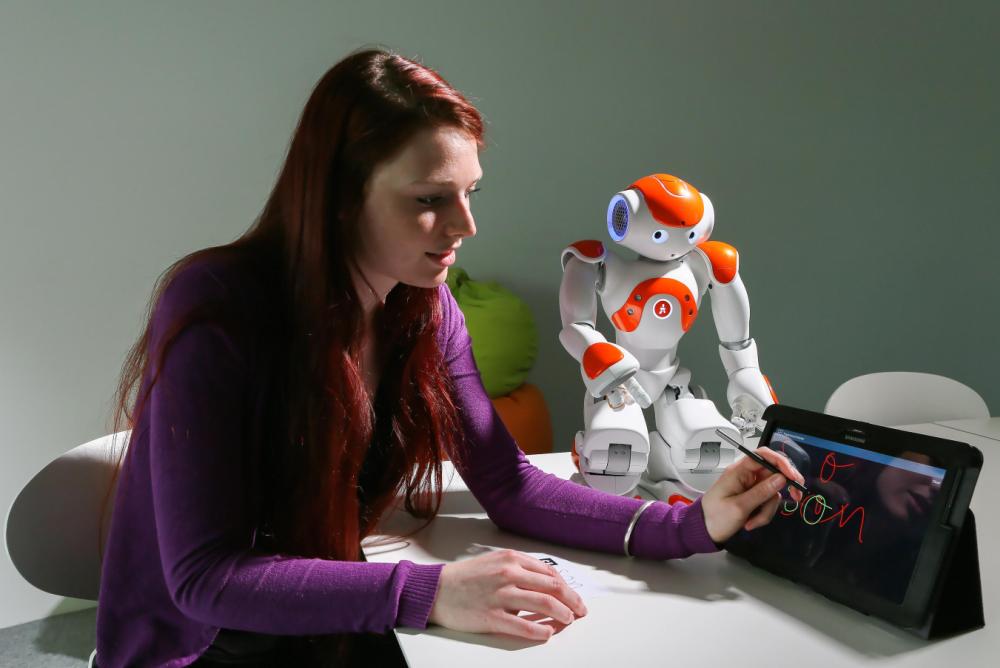 Researchers in Switzerland have designed a system where children teach robot students how to write, and in the process improve their own handwriting skills. This learning by teaching paradigm, they say, could engage unmotivated students as well as boost their self-confidence.

The prototype system, called CoWriter, was developed by researchers at the Swiss Federal Institute of Technology (EPFL) in Lausanne.

A humanoid robot, designed to be likeable and interact with humans, is presented with a word that the child spells out in plastic letters. The robot recognizes the word and tries to write it, with its attempt appearing on a tablet. The child then identifies and corrects the robot’s errors by re-writing the word or specific letters. Séverin Lemaignan, one of the authors of the study, said the research was based on a recognized principle in pedagogy known as ‘the protégé effect’. “The robot is facing difficulties to write. So the child as a teacher tends to commit itself to help the robot. And this is what we call in psychology ‘the protégé effect’; it [the child] will try to protect this robot and help him to progress. And it’s a pretty well known fact that if the robot fails and keeps on failing and not improve its handwriting, the child will feel responsible for that. And by just relying on this effect we can really engage the children into a sustained interaction with the robot,” explained Lemaignan. Previous studies have shown that when children experience difficulties in writing, they can lose confidence or eventually withdraw from the learning process.

This can have a knock-on effect for their entire education. But a program like CoWriter, where students put themselves in the place of the teacher and pass on what they know to their peers, can help them regain self-esteem and motivation. Lemaignan said their system makes the robot play the role of the peer who is the worst student in the class. “The idea here is to introduce a new role for the robot; the robot is the worst writer in the classroom. And for children who did face difficulties and were before the worst students, there’s now one who is even worse than them.” The scientists developed progressive writing algorithms and programed them into an existing commercially available robot called ‘Nao’, developed by French company Aldebaran Robotics. Their algorithms include a large database of handwriting examples that allow the robot to clumsily draw words on demand, and then gradually improve as it ‘learns’ from the child’s teaching.

The CoWriter system, still in the prototype stage, has so far been used in controlled experiments to verify that the algorithms meet the children’s needs and have the desired outcome. In preliminary tests it was used in primary school lessons with about seventy students ranging from six to eight years old, and then individually with a six year old child for one hour per week over the course of a month. The researchers now plan to conduct further studies with the hope of producing tangible results that show the benefits of such a program. The team hopes their research will be the basis for an innovative use for robotics which addresses a widespread challenge in education. However, any teachers that may feel their livelihoods under threat need not worry, says Lemaignan “Many people ask if this sort of technology could simply replace teachers. And… no. The key point is the robot plays a role that the teacher cannot play, that is the bad writer. But it doesn’t replace in any way the teacher; the teacher is still the one who decides the kind of mistakes the robot could do, should do, has to do to address the specific difficulties, trouble that the given child face.” -Reuters