Google and Microsoft stand with Sony Against Hackers 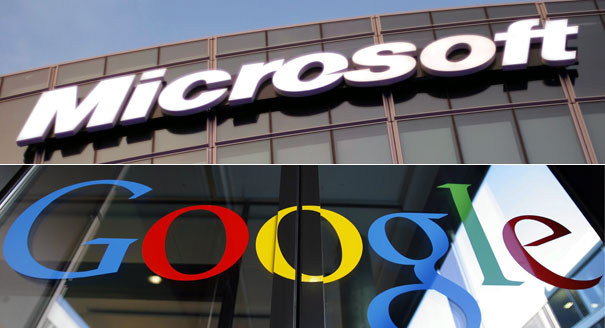 Google and Microsoft joined forces with Sony on Wednesday, using their online might to release “The Interview” film to online audiences despite threats from hackers.

“Of course it was tempting to hope that something else would happen to ensure this movie saw the light of day,” Google chief legal officer David Drummond said in a blog post. “But after discussing all the issues, Sony and Google agreed that we could not sit on the sidelines and allow a handful of people to determine the limits of free speech in another country — however silly the content might be.”

The Japanese entertainment giant began contacting Google and other companies a week ago to pursue potential for “The Interview” to be made available for streaming to viewers on the Internet, according to Drummond. “A cyber-attack on anyone’s rights is a cyber-attack on everyone’s rights, and together we need to defend against it,” Microsoft general counsel Brad Smith said in a blog post.

“After substantial thought, we decided to stand up with Sony and work with others to ensure that freedom of expression triumphs over cyber-terrorism.” Using their platforms as online stages for the film is expected to make Google and Microsoft targets for hackers who hit Sony’s film unit with a devastating cyber attack. Late Wednesday morning in California, “The Interview” became available for rent in high-definition streaming at Google Play, YouTube Movies, Microsoft’s Xbox Video service and at a dedicated seetheinterview.com website for a price of $5.99. Digital copies of the film could be purchased for $14. “It was essential for our studio to release this movie, especially given the assault upon our business and our employees by those who wanted to stop free speech,”

Sony Entertainment chief executive Michael Lynton said in a release. “I want to thank Google and Microsoft for helping make this a reality.” “The Interview” outraged North Korea by lampooning dictator Kim Jong-Un. The madcap comedy became available for rent in the United States from 1800 GMT on several platforms, one day before its December 25 limited theatrical release.

The future of the film had been in doubt after Sony said last week that it was canceling the release following a hacking attack on its corporate network and threats against moviegoers. The US government blamed the attack on North Korea, reportedly angry at the film’s cartoonish portrayal of Kim’s communist regime, and President Barack Obama threatened reprisals. – AFP