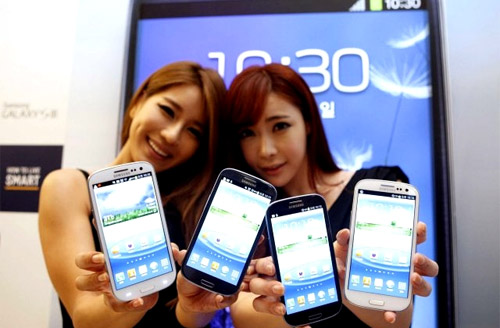 Samsung said the Galaxy Note 4 — initially scheduled for launch in October — would hit stores in South Korea and China this week before being sold in 140 nations by the end of next month.

It would be the first time a flagship Samsung product has gone on sale in China ahead of other markets, reflecting the firm’s desire to battle growing competition from cheaper Chinese-made rivals. The decision to bring forward the launch date also came after rival Apple reported a record opening weekend for its latest range of iPhones, including the iPhone 6 Plus — the US firm’s first foray into the big-screen market. Sales topped 10 million in just three days following Friday’s launch in the United States, Britain, Australia, Canada, France, Germany, Hong Kong, Japan, Puerto Rico, and Singapore. The new iPhone is not yet available in China.[contentblock id=2 img=adsense.png]

Samsung initially pioneered the market for the “phablet” devices — sized between a smartphone and a tablet computer — when it introduced its Galaxy Note series in 2011. Along with the Galaxy S smartphones, they helped the South Korean electronics giant dethrone Apple as the world’s top maker of smartphones. But Samsung has faced a growing challenge in an increasingly saturated market, where competition from cheaper Chinese handset makers has intensified in recent years. The company in July reported a 20 percent drop in its net profit for the second quarter, and its shares are currently trading at a two-year low. “We are temporarily going through a difficult business situation,” Lee Don-Joo, head of sales and marketing for Samsung’s mobile unit, told reporters at Wednesday’s launch in Seoul.

“But … we hope that we would be able to recover soon based on our fundamental capability for technical innovation,” Lee said. Sales of Galaxy Note 3 topped 10 million in two months after its launch in 2013, and Lee predicted the Note 4 would outperform that. The 5.7-inch Note 4 comes with S-pen stylus allowing users to draw and write on the screen and perform various tasks simultaneously. The presence of a stylus pen — not offered by iPhone 6 —offers a “unique input methodology,” said Lee Young-Hee, executive vice president of Samsung’s mobile unit. “No other phablets offered by rival companies offer such an intuitive experience,” Lee said. -businessinsider

The Publicity of Private Lives

The Publicity of Private Lives