Meet the New Iphone 6 and Iphone 6 Plus from Apple 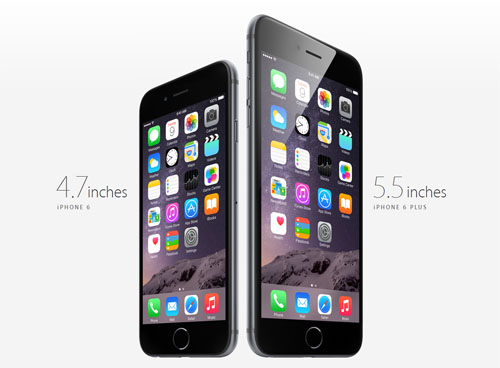 After a wait of more than two years, Apple has finally taken its first foray into the world of wearables with the unveiling of the Apple Watch. The rectangular wristwatch was unveiled alongside two new, larger iPhone handsets, and a new mobile payment system called Apple Pay. The iPhone 6 has a 4.7-inch screen, curved edges and will be available in dark black and gold, while the iPhone 6 Plus has a 5.5-inch screen and 185 per cent more pixels than the 5S. The watch also understands questions in messages, and offers pre-selected answers, and messages can be dictated to the iPhone through the watch. Users can also talk to the watch and send a voice reply, or have it transcribed to them. 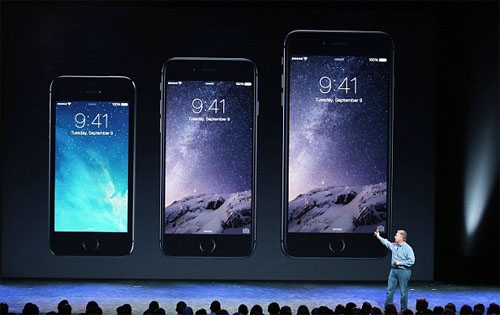 There is no keyboard on the watch, and messages can only be sent through dictation, or emoji. On to apps, the Apple Watch has a photo app that shows favourite photos from the iPhone on the screen. There’s also a Maps app, and users can get turn-by-turn directions on the watch, with different vibrations depending on whether they should turn left or right. Elsewhere, users can also send their heartbeat, via a sensor, and the receiver feels the vibration that matches their pulse. Apple Pay is the firm’s new payment system compatible with the iPhone 6, iPhone 6 Plus and the Apple Watch. The mobile system works by holding phone up to a generic card reader and pressing a finger on the TouchID button. The NFC chip is fitted across the top of the phone. 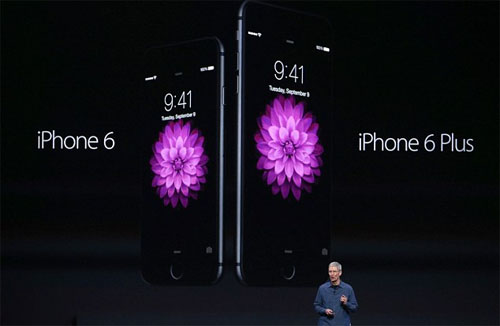 All details are encrypted and the system stores payment information securely. It uses the Passbook app and cards that are already on file with iTunes can be saved to it. Users can also take a picture of their own credit card and add it to the account. This is verified by the card’s bank before being accepted. If an iPhone is lost, users can suspend all payments via the Find my iPhone service. This won’t cancel the cards, either, because the card details themselves are not stored on that device. Apple doesn’t know what you bought, where you bought it, and how much you bought it for,’ said Apple’s senior vice president of internet software and services and reports Eddy Cue. Starting in US with Amex, MasterCard, and Visa, Apple Pay will also work with banks, and covers 80 per cent of the US, claimed Mr Cue. 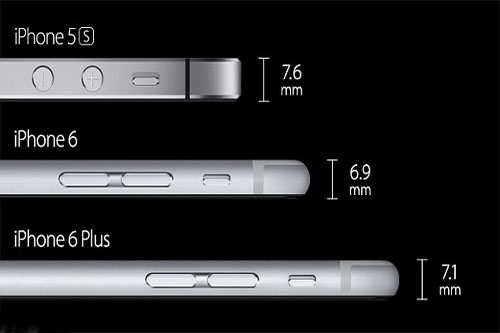 Third party developers can also make apps for the watch. Initially, generic notifications will just show up. But developers can extend that notification with something called WatchKit which gives you notifications of your choice. The devices were unveiled at the Flint Center for the Performing Arts at De Anza College in Cupertino, the same location where Steve Jobs introduced the original Mac 30 years ago. 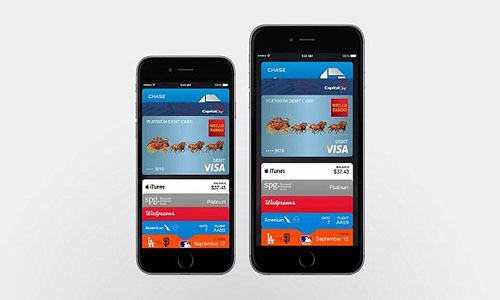 The devices were unveiled by Apple’s senior vice president of worldwide marketing Phil Schiller. Schiller said: ‘It is truly the most beautiful phone you’ve ever seen. 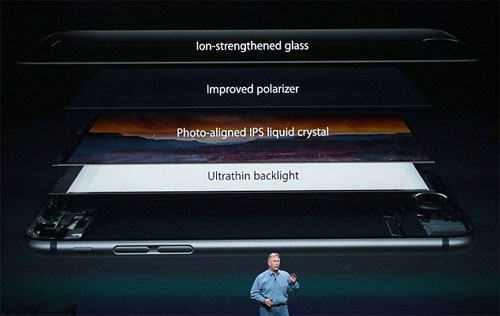 These are a new generation Retina displays, we call them Retina HD. They’re bigger – a lot bigger.’ Both devices also have a ‘broader’ angle of view, and there is a new feature being launched with this range of iPhones called ‘reachability’. Users will now be able to double-tap the home button and the whole display will slide down, making it easier to reach the top buttons.

Speaking of buttons, Apple has also moved the power button to the side of both devices, so it’s easier to reach. Inside the devices is the new Apple A8 64-bit chip. It has 2 billion transistors and is 13 per cent smaller than the A7.  The 8MP camera has true-tone flash and its camera iSight sensor will focus pixels, and it also has autofocus that’s twice as fast as the last generation. 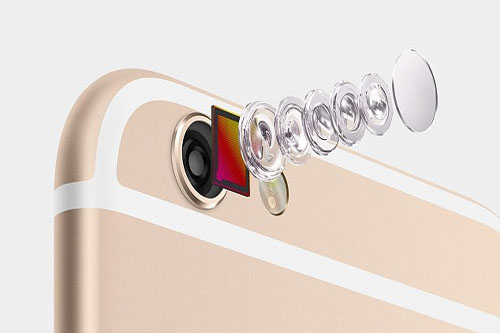 Both devices will also launch on Apple’s next-generation software, iOS 8, which features a new messaging app that lets you quickly send voice notes. This makes the processing unit 20 per cent faster, and 50 per cent faster graphics. There is also a host of new sensors, including the M8 ‘motion coprocessor, which will be useful for fitness apps. M8 can tell the difference between cycling and running, for example, and it can also calculate distance and elevation. It does this with a barometer, which uses air pressure to measure relative elevation. -dailymail 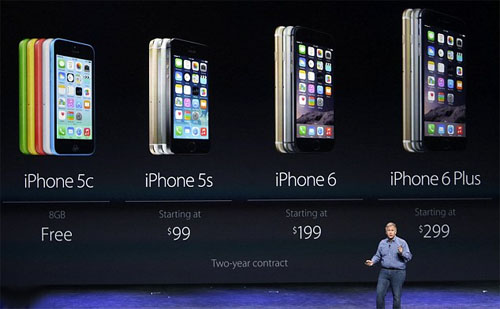