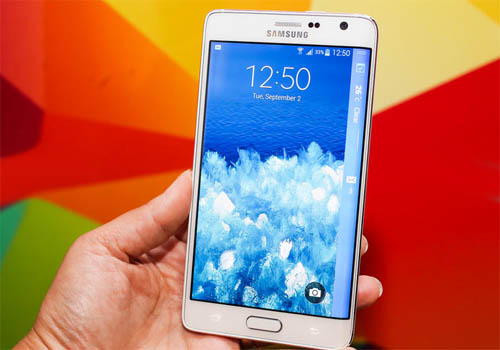 It’s been a while since Samsung tried its hand at a rounded screen, and even longer since the device-maker took a stab at anything resembling a second display. Nevertheless, here is the Samsung Galaxy Note Edge, essentially a stylus-toting Galaxy Note 4 with a curved — and independent — right edge that has its own purpose and behavior.

Curved like an infinity pool, the touchscreen bend on the Edge’s face contains its own contextual controls, app shortcuts, and notifications that you can see and interact with without leaving whichever window you’re on.  Swipe the side display or flick it, and it turns into one of several widgets: a Yahoo sports ticker with scores, a list of current trending Twitter hashtags, or app-icon shortcuts. In various Samsung apps it turns into camera control buttons, or menu-bar controls for a sketch program. When in standby, the side edge softly glows with date, time and alarm info. You can use it to quickly reject calls, and keep tabs on messages or social networks. An SDK that Samsung will release to developers means you’ll be able to do things like follow stock quotes and sports scores in your own ticker, or perhaps continuously track your steps.

A memory match game can use the edge to flash the shape you need to pair. A photo thumbnail on the side can expand into a full-screen image when you tilt the phone. The S Note and camera apps also take advantage of the Edge Display to surface a few more on-screen controls. An Edge manager app is your key to customization.  Samsung’s Edge screen owes the waterfall look of its continuous curvature to a single pane of glass. The floating right-to-the-edge display is visually arresting for sure, and unusual enough to generate some buzz. It’s easy to thumb and control, and feels incredibly futuristic. The fact that it’s somewhat useful is nice, too. What feels like a gimmick at first is actually a clever way to explore how to turn a phone’s edges into usable space.

So far, this seems like Samsung’s best-rendered attempt at a second screen, one that’s just crazy enough — and contextual enough — to actually work. Apart from the funky shape, the black or white Note Edge is almost identical to the Note 4. Specs differences are slight — it has a 5.6-inch screen versus a 5.7-inch display), a less capacious 3,000mAh battery, and a 64GB option in addition to a 32GB version. The more unique Note Edge will be less globally widespread than the Note 4 flagship. In the US, it’ll come to AT&T, Sprint, T-Mobile, and Verizon, though there’s no pricing yet and the only release time frame we have is “later this year.” -cnet