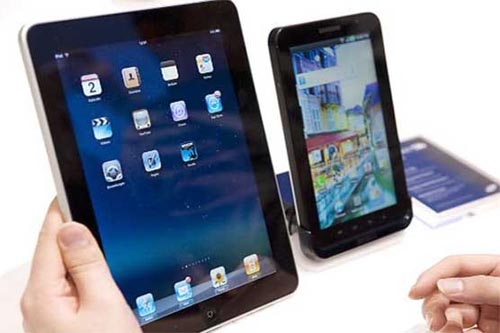 Tablets won’t eclipse personal computers as fast as once thought, according to studies by market tracker International Data Corporation (IDC). IDC on Friday cut its forecast for shipments of tablets and “two-in-one” devices combining tablet and laptop features to 233.1 million, saying growth would be about half of what was originally predicted.

“When we look at the global picture, it would be easy to say that the tablet market is slowing down,” said IDC research director for tablets Jean Philippe Bouchard. “But, when we start digging into the regional dynamics, we realize that there is still a good appetite for this product category.” While shipments in mature markets such as North America and Western Europe were forecast to remain flat, those in emerging regions were expected to climb overall by 12 percent. Meanwhile, the outlook for personal computer (PC) shipments was less dreary than originally envisioned, due in part to businesses replacing machines powered by outdated Windows XP software. IDC forecast that worldwide PC shipments would fall by 3.7 percent this year instead of by six percent as it had predicted earlier.

Growth in shipments of desktop and laptop computers in mature markets would be more than offset by reduction in emerging markets such as Asia, Latin America and the Middle East, according to IDC. “Programs to reduce PC prices, such as Windows 8.1 with Bing, have helped to improve PC shipments in some segments,” said IDC senior research analyst Jay Chou. Nevertheless, the prospects for significant PC growth in the long term remain tenuous, as users increasingly see PCs as only one of several computing devices.” People seem to be waiting longer to replace PCs and are increasingly tempted by alternate computing platforms, according to IDC.

A separate IDC report this week estimated that more that 1.25 billion smartphones would ship worldwide this year in a jump of nearly 24 percent from the 1.01 billion shipped last year. The number of smartphones shipped was expected by IDC to climb to 1.8 billion annually during the next four years. “The smartphone market, which has experienced runaway growth over the last several years, is starting to slow,” said IDC research manager Ramon Llamas. “The key for vendors now is to maintain a presence in the higher-margin mature markets, while establishing a sustainable presence within the fast-growing emerging markets.” -samaa