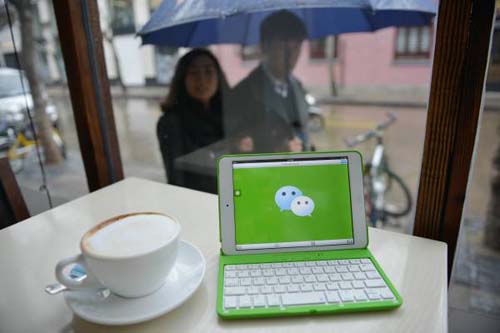 China’s ruling Communist Party is launching a new crackdown on popular instant messaging platforms including Tencent’s WeChat, state media said Wednesday, the latest in a series of moves to stifle online speech. The month-long campaign follows a similar clampdown last year on Sina Weibo, a Twitter-like microblogging service whose popularity has been hit as China’s censors have tightened their grip.

It also comes amid a string of violent attacks that Beijing has blamed on separatists from the mainly Muslim far-western region of Xinjiang, and ahead of the 25th anniversary of the Tiananmen Square killings. Tencent’s WeChat is an instant messaging platform that allows users to send text, photos, videos and voice messages over mobile devices. It has more than twice as many monthly active users, 396 million, than Sina Weibo on 143.8 million, but most We Chat users send their messages privately rather than sharing them publicly. Now the growing popularity of group chats — through which We Chat users can share messages with up to 500 participants — has drawn the attention of authorities, according to the state-run China Daily newspaper. Such chats have “become a challenge for the spreading of rumours and other harmful content”, the paper reported, citing an official from China’s State Internet Information Office (SIIO).

The new crackdown will target public We Chat accounts “spreading rumours and information relating to violence, terrorism and pornography, as well as those using instant messaging for fraud”, the official Xinhua news agency said, citing an SIIO statement. “We will firmly fight against infiltration from hostile forces at home and abroad,” the statement said, according to Xinhua. The crackdown is being jointly overseen by SIIO, the Ministry of Industry and Information Technology and the Ministry of Public Security, Xinhua said. It added that WeChat and several other instant messaging companies “have agreed to cooperate with the authorities and launch internal inspection”. Jail for ‘rumour’ spreading  China’s Communist Party authorities keep a tight grip on online communication, with a new law last year calling for up to three years in prison for social media participants who spread “rumours” that are reposted more than 500 times.

Chinese-American billionaire blogger Charles Xue — who regularly posted reform-minded comments on a variety of sensitive issues to 12 million followers — was arrested for suspected involvement in prostitution. Links between the crackdown and the arrest of the popular blogger were routinely dismissed by state media. Xue was paraded on state television, which also broadcast an interview with Pan Shiyi, another of China’s most popular bloggers, in which he appeared contrite and warned of the dangers of “casual” online posts. Beijing has blamed online videos and audio recordings in part for inspiring a recent spate of terror attacks in Chinese cities, including a deadly market bombing last week that killed 43 in Xinjiang’s regional capital of Urumqi. More than 200 people in Xinjiang, home to mainly Muslim Uighurs, have been detained in a clampdown on “terrorist” videos, according to a Xinhua report earlier this month. A social media crackdown last year led to a nine percent decline in the total number of microblog users over 2013, according to a January report by the government-linked China Internet Network Information Centre. Among those who reduced their use of micro blogging, 37 percent switched to We Chat, the report said. -Samaa