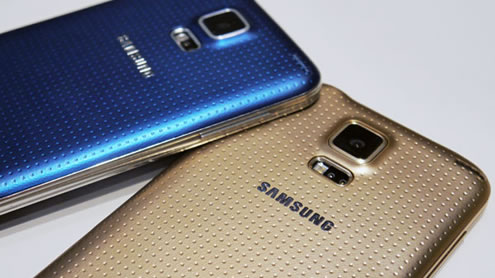 Samsung has received high praise indeed for its new Galaxy S5 display, proving once again that its hardware innovation is on song. Thought there was no real technological innovation in there? Seems like Samsung has been hiding it away. Display experts DisplayMate rate it the best smartphone screen ever.

The Galaxy S5, like the S4, is an OLED display, the technology where Samsung leads the market. The image quality of OLED is, theoretically, under pressure from new LCD screens enhanced with quantum dot technology. Quantum dot is a technology that Apple AAPL +0.91% recently sought new patents around but its core patents belong mostly to start-ups Nanosys and QD Vision, the former, part-owned by Samsung, a small screen specialist and the latter currently focused on TVs.

But the latest DisplayMate tests suggest that even quantum dot will be hard pressed to surpass the S5 screen. DisplayMate President Dr. Raymond Soneira says: While many people have assumed that the Galaxy S5 has basically the same display as the Galaxy S4, but just a bit bigger, that isn’t the case… Our detailed Lab tests show that there have been significant display performance improvements in almost every single test and measurement category.

The hands-on review of the S5 here on Forbes noted an evolution of the phone rather than revolution. However, at least in terms of the display the performance makes it very difficult for rivals like Apple to surpass it.

That’s important as the more we understand about color as a purchasing requirement, the more the color performance of smartphones seems to matter. The point that QD manufacturers make is that smartphones are currently making use of only about 30 – 50% of human color perception capability. Color is a big selling point, though Apple places its emphasis on clarity and precision.

DisplayMate judges the S5 to be 22% brighter than the S4, itself a benchmark phone, but under high ambient light it is a whopping 47% brighter. “…. it’s the brightest mobile display that we have ever tested,” says Soneira.  The S5 like the S4 has a number of saturation options. It also boasts a 27% improvement in power efficiency.

This author has not added a biography. Meanwhile Top has contributed 3145 posts. Click here to view them.