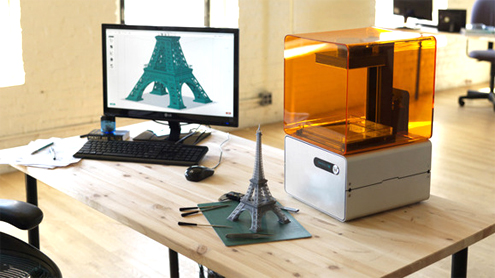 Crowd-funding website Kickstarter is being sued for its promotion of a new 3D printer.

More than 2,000 users contributed over $2.9m (£1.8m) to help Massachusetts-based Formlabs build the device.However, 3D Systems – a leading maker of printers that turn computer design files into real-world objects – has alleged one of its patents was being infringed by the machine.It has also filed a lawsuit against Formlabs itself.The two defendants have yet to respond to the accusations.

Although patent lawsuits are relatively common in the US tech industry, this marks the first time Kickstarter has become involved in a case linked to a product marketed on its site, according to the country’s Pacer (Public Access to Court Electronic Records) system.At the heart of the allegations is a printing technique called stereolithography.It involves directing an ultraviolet laser across a liquid synthetic substance to cause a thin layer to solidify.

This is then repeated layer-by-layer, with the shape of the resulting object determined by the pattern drawn by the laser beam.The technique has been about since the 1980s. However, California-headquartered 3D Systems identified a problem with the process – if a feature was too thin at one point and unsupported, it might not solidify properly or result in the object losing its shape.The firm came up with a solution that involved adapting the procedure so that each layer did not need to be completed before moving onto the next one.

By staggering the point at which each part of a cross-section is solidified, there is greater opportunity to provide structural support for each feature.3D Systems said this resulted in the opportunity to make more accurate, higher-resolution objects.It was awarded a patent for the method in 1997.When the MIT (Massachusetts Institute of Technology) Media Lab researchers behind Formlabs submitted their fundraising campaign to Kickstarter, they made a virtue of the quality of the print-outs they could offer.They said that by using stereolithography, their printer could offer “layer thicknesses and feature sizes that are worlds ahead of what is possible with” the existing technique used by budget printers, which melt plastic and squeeze it through a nozzle to build up each layer of an object.

They noted other high-definition 3D printers typically cost tens of thousands of dollars, but said they would provide their Form 1 printer to anyone who pledged $2,299 or more.However, 3D Systems said it was “well known” in the industry that it had a significant portfolio of stereolithography-related patents and had already been involved in other lawsuits to defend the intellectual property.As a result, it said, Formlabs must have known, or chosen not to find out, whether there might be a risk of patent infringement.

3D Systems’ court filing notes the Techcrunch news site had quoted one of Formlabs’ co-founders as saying that one of the reasons it had been able to offer its printer at such a low cost had been because several patents had expired “meaning that the team didn’t need to pay high licensing fees to get this product to market”.It also highlights that the claim had been repeated by a second member of the Formlabs team in an interview given to SolidSmack.

The filing also flags news coverage of a report by JP Morgan bank specifically highlighting the disruptive threat that Formlabs cheap sales price posed to sales of 3D Systems’s products.The lawsuit says Kickstarter is also named as a defendant because the site took a 5% cut of the pledges made to Formlabs, and by promoting the Form 1 printer had caused “immediate and irreparable injury and damage to 3D Systems”.

Although this is the first case of its kind Kickstarter has been involved in, it is not the only lawsuit it is fighting.The firm is also embroiled in a dispute with ArtistShare – another crowd-funding site – about the rights to a patent describing how database software can be used to raise cash for creative works. – BBC