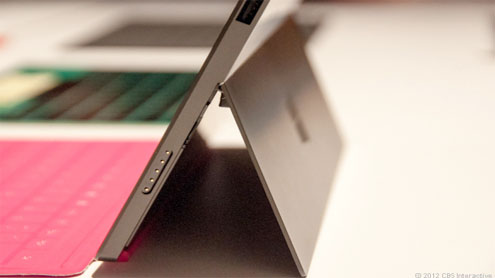 A new suit brought against the software giant claims that the company falsely advertised 32GB of storage space in the Surface tablet, when the device only comes with 16GB.

Microsoft is being sued for allegedly misleading advertising about the amount of storage space in its new 32GB Surface tablet.The lawsuit was brought by California lawyer Andrew Sokolowski who claims that he bought the device under the premise that he’d get 32GB of storage but soon found out it actually came with much less, according to the Associated Press.

Sokolowski’s argument is true. Microsoft’s Surface, which hit stores last month, is advertised as having 32GB of storage when in fact there is only 16GB of free storage space for users to fill with music, documents, and photos. This is because the device comes pre-loaded with space-taking apps like Word and Excel, along with Windows recovery tools and Windows RT. For the 64GB model, users are left with only 46GB.However, Microsoft has not made any of this a secret. On its Web site, it plainly states that the Surface comes with only 16GB of free space and outlines what exactly is eating up the rest of the storage. It also gives advice on how to get more space, such as using SkyDrive cloud storage, a microSD memory card, or a USB flash drive.

“We believe this lawsuit is without merit,” a Microsoft spokesperson told CNET. “Customers understand the operating system and pre-installed applications reside on the device’s internal storage thereby reducing the total free space.”The Surface isn’t the only tablet affected by this issue; in fact, most all devices that hold storage come with less space than advertised. For example, Apple’s 32GB iPad comes with only 28GB free storage capacity; and its 16GB actually holds 14.3GB.

According to the Associated Press, Apple fares better than Microsoft in the tablet storage department because Apple’s pre-installed apps use their own separate memory space. Microsoft’s operating system, on the other hand, is stored in the same storage space as the user’s data.Sokolowski’s lawyers filed the lawsuit against Microsoft in Los Angeles Superior Court yesterday and aim to get class action status. According to the Associated Press, the crux of the suit is to get the software giant to change how it advertises its devices and to pay damages for alleged wrongful conduct. – CNET