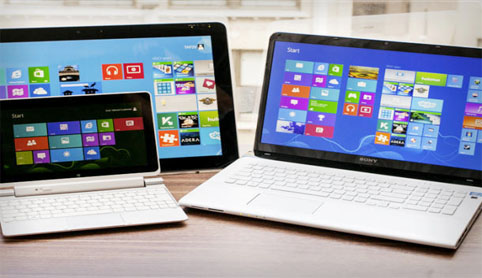 Microsoft's allies getting nervous about Windows 8

If Microsoft’s long-time partner Intel can’t muster up much enthusiasm for Windows 8, how are consumers expected to do so?

The chip giant yesterday posted some pretty dismal third-quarter results, which weren’t themselves a big surprise given Intel’s preannouncement and all the lackluster PC data in recent weeks. But what’s a little jarring is Intel’s cautious forecast for the fourth quarter — a period that should be benefiting from the launch of Windows 8.Historically, PC demand rises with a new operating system release, and computer makers were expecting the same from Windows 8.

However, it’s becoming increasingly clear that lackluster PC sales may not revive much despite Windows 8. And that fact doesn’t bode well for computer makers and the companies who provide components.

It bodes even worse for Microsoft, which has essentially bet its business on the success of Windows 8. The software giant has redesigned its user interface to include more tablet- and smartphone-like features, including touch capabilities, but it’s unclear whether consumers will embrace the changes.Intel Chief Executive Paul Otellini yesterday said the PC business should grow at about half its normal rate in the back half of the year, and Intel predicts that its fourth-quarter revenue should slide about 2 percent from the previous year.

“Our customers are taking a cautious inventory approach in the face of market uncertainty and the timing of the Windows 8 launch,” Otellini said during a conference call with analysts.He added that he’s “very excited” and “very optimistic” about the operating system, but Windows 8 isn’t yet igniting PC demand.”The darn thing hasn’t even launched yet,” Otellini said. “We’ll know a lot more about this 90 days from now.”

The uncertainty means PC makers, like Hewlett-Packard, Dell and others, are being cautious with their production plans. The companies have portrayed Windows 8 as the computer market’s savior, the big opportunity to compete with Apple’s iPad and other mobile devices that have been hurting PC sales. But right now, they don’t know what demand will be like for Windows 8.

“Nobody has any idea what PCs are going to do this holiday season,” Evercore analyst Patrick Wang said. “Nobody knows the impact of Windows 8 … but expectations are pretty low. Intel’s (original equipment manufacturer) partners clearly are showing zero conviction by their lack of build at this point.”While Otellini had good things to say about Windows 8 yesterday, he reportedly questioned its readiness during a staff meeting last month, noting that the OS still had bugs and was being released before it was ready.

Intel later responded to the report, insisting Windows 8 is going to be “one of the best things that ever happened” to the company. But Otellini’s comments likely still raised some concerns for PC buyers and other companies in the industry.Companies in the computer industry have been pushing new thin-and-light computers for several months, but the devices haven’t been selling well so far, in part because they’re pretty expensive.

The introduction of touch as an element to Windows 8 computers will only drive up costs at a time when consumers are minding their budgets.And even with new features, PCs still will have to compete with tablets and smartphones, including a possible smaller — and less expensive — iPad. So far, consumers are largely opting for smartphones and tablets instead of computers. The big question remains whether Windows 8 can change that.While it’s probably still too soon to tell how consumers will respond to Windows 8, one thing is clear. If a new OS can’t spur enthusiasm for PCs, maybe nothing can. – CNET