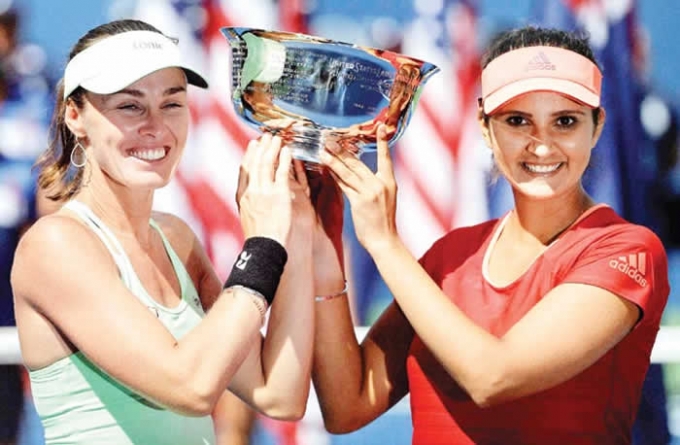 It was the 12th grand slam women’s doubles title for Hingis while the third for India’s Mirza, all of which have come with the Swiss in the last year.

The pair, who have now won 36 successive doubles matches, are also the reigning Wimbledon and US Open champions. Thanks to my partner, we have had an incredible year,” Mirza said in a courtside interview. “We keep going and it’s great to have all these records with you.” Both pairs were broken four times each in the first set before Mirza sealed it in the tiebreak after 62 minutes when Hradecka sent a forehand service return long over the baseline. Hingis, who was knocked out by Mirza and Croatia’s Ivan Dodig in the mixed doubles quarter-finals, took a medical time out at the end of the first set to have treatment to her right shoulder, but did not appear troubled.

Hradecka dropped serve in the first and fifth games of the second set, to give the top seeds a 4-1 lead, and while Mirza lost her next service game they never looked like relinquishing control with Hingis dominant at the net. The Swiss was then broken while serving for the title, though they sealed it on their fourth championship point when Hradecka’s running forehand sailed over the baseline, the third time she was broken in the set. “You have won two grand slam doubles so you were very tough,” Hingis said of the Czech pair. “I know everyone will say break, break, break but you guys have the best returns in doubles.”