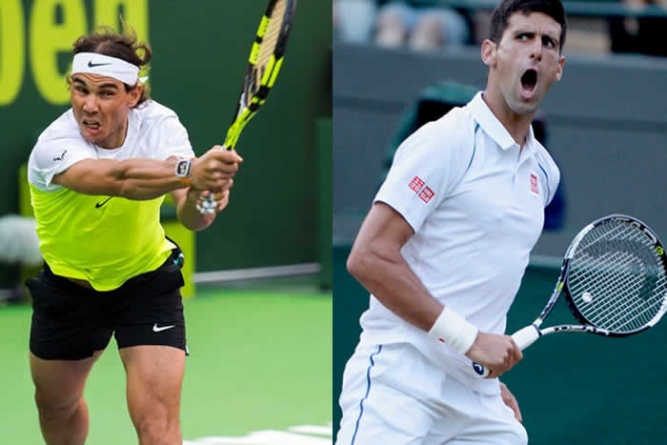 Rafael Nadal and Novak Djokovic remained on course for their first clash of 2016 as both came through tough quarter-finals on Thursday to reach the last four of the Qatar Open. A fist-pumping Nadal qualified by beating Andrey Kuznetsov over three sets in an enthralling battle.

The world number one is yet to drop a set in his three matches so far. Nadal’s match, however, will live longest in the memory. The Spaniard, looking to recapture the form that has made him a 14-time Grand Slam winner, won the first set comfortably enough but from there the real drama started. Despite initially being a break up, Nadal lost a see-saw second set as Kuznetsov’s powerful forehands brought him back into the match. The Russian eventually took it 7-5, the first time the 24-year-old had ever taken a set from Nadal. The final set was also unpredictable, with number two seed Nadal again squandering a break advantage before decisively taking the Russian’s serve in the ninth game.

The world number five then served out immediately afterwards to secure a place in the last four. “Winning matches in three sets is very good news and very positive thing,” Nadal told reporters. “That happens when you are fresh mentally, when you are able to analyse well what’s going on in the match. “And last year I lost a lot of matches like today’s match. So for me it’s so important to win these kind of matches.” Nadal added that he was happy with his game other than his serve, which was broken four times. Meanwhile, Djokovic overcame losing his serve in the first two games of each set to beat his Argentine opponent.

Despite that, the Serb never looked like going out, especially after Mayer squandered his best chance in the second set. Serving for the set at 5-4, he was broken to love in a game which included the Argentinian putting a straight forward overhead smash into the net. Djokovic took the next two games as well to secure his first ever semi-final appearance at the Qatar Open. Also in the last four — where he will play Nadal — is the Ukrainian outsider Illya Marchenko. He continued his remarkable run in Doha, overcoming injury and France’s Jeremy Chardy to qualify for the semi-finals.

The world-ranked number 94, who knocked defending champion David Ferrer out in the first round, won in straight sets 6-3, 7-6 (7/3). Marchenko, 28, triumphed despite calling for two medical timeouts in the second set and receiving treatment on court from a physio for a back problem. “(The) second set was more difficult, because I got a pain in my back and I was a bit struggling with that,” said Marchenko. “Because of my back, I started to make more mistakes and to be not that confident in the rallies, in the running, and especially in the serve.” Marchenko, from Donetsk, also revealed he is now based in Slovakia because of the conflict in eastern Ukraine. Djokovic will play the winner of Tomas Berdych or British qualifier Kyle Edmund. –AFP