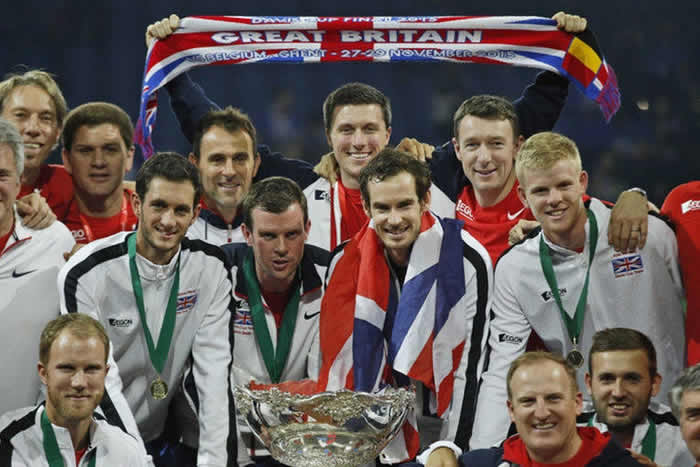 Murray 'on top of the world' after Davis Cup win

Britain won the Davis Cup for the first time in 79 years in Ghent on Sunday when Murray defeated David Goffin 6-3, 7-5, 6-3 to take an unbeatable 3-1 lead over Belgium. Several newspapers focused on the contrast with decades of British underachievement in tennis.

“British tennis, for so long the punchline to gags about national sporting ineptitude, has recovered its pride,” wrote Kevin Mitchell in the Guardian. “It is some journey from laughing stock to No 1,” said the Times  Matt Dickinson. The win over Goffin made Murray just the third player, after John McEnroe and Mats Wilander, to win all eight singles in the same calendar year since the Davis Cup World Group started in 1981. And it underpinned Murray s place in tennis history following his headline-making wins in the 2012 US Open and Olympics, and at Wimbledon the following year. “Murray now further aligns himself with the fellow greats of the modern game, Roger Federer, Novak Djokovic and Rafael Nadal, who have all won the premier team competition,” said the Daily Mail s Mike Dickson.

While much of the adulation focused on Murray, a few pundits were careful to heap praise on Britain s Davis Cup team, which included Murray s brother, Jamie. “Murray s individual contribution has been immense, but he has headlined a team effort that has been five years in the making,” said the BBC s tennis correspondent Russell Fuller. “Strategy and team spirit have been expertly co-ordinated by captain Leon Smith, and many other players have won crucial points in the climb through the divisions,” he added. However, most pundits credited Murray with clinching the title. “As team triumphs go, this was about as individual as it gets. Andy Murray was on court to win the third and decisive point of the Davis Cup final this afternoon,” wrote the Telegraph s Simon Briggs. The Times s Dickinson said: “Soon there were six British players accepting their personal trophies, but it is Murray who has put Britain, improbably, on the summit of the tennis world.”