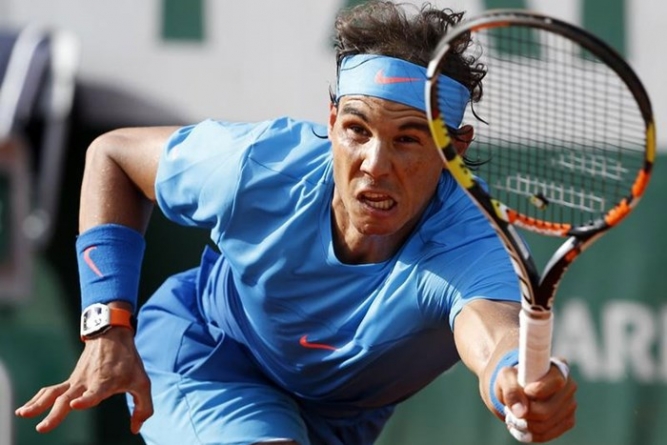 Rafael Nadal believes all the pressure will be on Novak Djokovic in Wednesday’s French Open quarter-final with the nine-time champion dismissing the headline-grabbing collision as “not vital”.

Nadal has defeated world number one Djokovic six times out of six at Roland Garros where the Spaniard boasts a record of 70 wins and just one loss. Three of his victories against Djokovic have been in the last three years — in the 2012 and 2014 finals and 2013 semi-finals.

In contrast to Nadal’s domination, Djokovic remains frustratingly just one French Open title short of a career Grand Slam, something already achieved by the Spaniard, fellow present-day rival Roger Federer and five other men. “This is not vital,” said Nadal, who has not played Djokovic at such an early stage of any tournament for eight years. “If it was a final, things would be different. It’s a quarter-final and if you win you go to the semi-final. It’s not a matter of lifting the trophy. “Last year I beat him in the final. This is not the match of the year. Matches of the year are finals and decisive matches. If I lose the quarter-final my life won’t change.” Top seed Djokovic eased into the last eight on Monday with a 6-1, 6-2, 6-3 win over France’s Richard Gasquet while defending champion Nadal, seeking a 10th Roland Garros crown, saw off unseeded American Jack Sock, 6-3, 6-1, 5-7, 6-2. It was Nadal’s 70th French Open win against just one defeat and his 39th in a row at a tournament he has dominated for a decade.

As well as his Paris supremacy, Nadal also holds a career 23-20 edge in head-to-head meetings with Djokovic. But Djokovic is the overwhelming favourite to break that stranglehold this year after claiming a 26th successive win on Monday. The 28-year-old has lost just twice all year and has not been defeated since February. Since the turn of the year, he has won a fifth Australian Open as well as Masters titles at Indian Wells, Miami, Monte Carlo and Rome. Nadal, however, arrived in Paris on his lowest world ranking since 2005 and without a European claycourt title for the first time in a decade.

Against Gasquet, Djokovic was almost unplayable. He carved out an astonishing 23 break points and was broken just once when his concentration wavered in the third set. The in-form Serb also fired 47 winners as he reached a 24th successive Grand Slam quarter-final. Nadal, who will celebrate his 29th birthday on Wednesday, could drop out of the world top 10 if he loses to Djokovic. But he says his main priority is to finish the full season unlike 2014 when he missed virtually the entire second half of the campaign, including the defence of his US Open title.

“My situation is different to Novak’s. If I don’t win I will think about the next tournament,” said the Spaniard who did at least admit Wednesday’s blockbuster will be the “toughest quarter-final I have ever played”. Djokovic said he will try and stick to his usual routine but admitted that facing his old adversary so early feels unusual. “Playing him here and playing him in any other tournament is completely different,” said the 28-year-old Serb. “But the conditions are very suited to his style of game. He loves playing on Court Philippe Chatrier.” He added: “I am trying to keep my routine the same and not give so much importance to the match. I know what to do, I know what’s expected of me.” –AFP