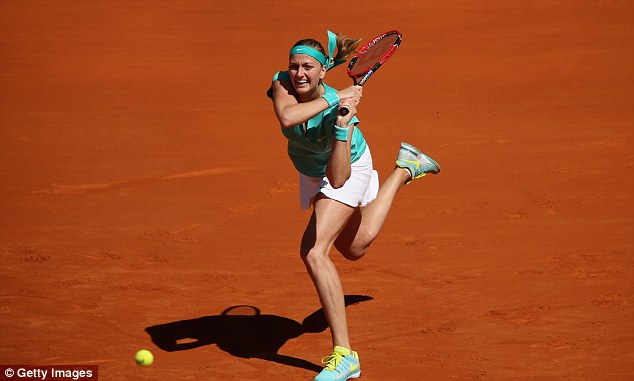 Maria Sharapova advanced to the third round of the Madrid Open by beating Mariana Duque-Marino of Colombia 6-1, 6-2 on Tuesday. The third-seeded Russian and defending champion broke Duque-Marino’s serve four times while saving three break points on her own serve.

“She is someone who, if you give her time, creates angles, slices and usually drop-shots a lot more than she did in this match because she has the hands and the ability to do so,” Sharapova said.

Anastasia Pavlyuchenkova of Russia rallied in a hard-fought second set to beat Sara Errani of Italy 3-6, 7-6 (7), 6-4. In the men’s tournament, fifth-seeded Milos Raonic of Canada served nine aces and broke Argentine player Juan Monaco’s serve twice to win 6-3, 6-4. Raonic is enjoying a career-high ATP ranking at No. 6 and arrived in Madrid after reaching the quarterfinals or better in nine of his last 12 Masters tournaments. Also, 10th-seeded Grigor Dimitrov of Bulgaria advanced after Donald Young of the United States had to retire from the match because of injury.

The 25-year-old Young received treatment for back pain while trailing 6-4, 3-0 and was unable to resume play. Dimitrov will next face Fabio Fognini of Italy. Nick Kyrgios of Australia reached the second round by beating Daniel Gimeno-Traver of Spain 6-2, 6-3. Kyrgios was beaten in the final of the Estoril Open two days ago by Richard Gasquet, and also lost his status as ATP’s highest-ranked teenager because he turned 20 that day. Fernando Verdasco, who lives in Madrid, beat fellow Spaniard Guillermo Garcia-Lopez 4-6, 6-2, 6-3. Argentina’s Leonardo Mayer beat Gilles Muller 6-3, 6-3 and Roberto Bautista Agut of Spain advanced to the second round with a 7-5, 6-3 victory over Marius Copil.

Also advancing were Jo-Wilfried Tsonga, Gael Monfils and Alberto Ramos-Vinolas. Jack Socks of the United States will meet Tsonga in the second round after beating Spain’s Pablo Andujar 6-4, 7-5. On the practice courts, second-seeded Andy Murray could be seen getting used to the ball’s bounce in Madrid’s altitude and warm, dry conditions a day after clinching his first career clay court title in at a cold and damp Munich Open.