Tennis superstar Maria Sharapova takes on the game’s much-hyped “next big thing”, Canada’s Eugenie Bouchard in a blockbuster Australian Open quarter-final on Tuesday. Sharapova, the second seed, is the world’s highest-paid female athlete with five Grand Slams to her name, while 20-year-old Bouchard appears certain to become a household name if she can snare a breakthrough major. 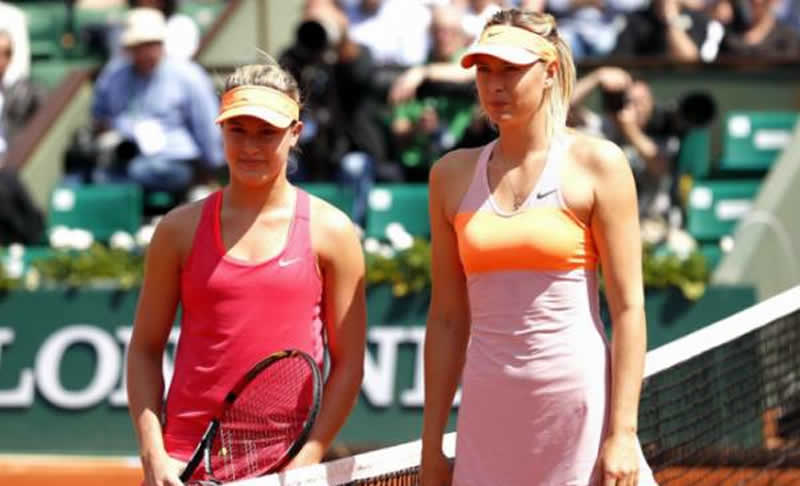 In contrast to the celebrity wattage on show in the Sharapova-Bouchard clash, Tuesday’s other quarter-final features two no-nonsense professionals in third seed Simona Halep of Romania and Russian 10th seed Ekaterina Makarova. Both players have ghosted through the draw on their way to the last eight, efficiently disposing of opponents while shunning the spotlight. Sharapova, 27, won the Australian title in 2008 and can snatch the world number one ranking off arch-rival Serena Williams if she repeats the feat this year. She has defeated seventh seed Bouchard in their previous three meetings but had to come from behind in their most recent clash at the French Open semi-finals last year. “It was a really tough three setter. She’s been playing incredibly well — confident aggressive tennis,” the Russian said. “She’s a big competitor. An aggressive player that likes to take the ball early and dictate points.

” Bouchard was the tour’s most consistent player at Grand Slams last year, making the final at Wimbledon and the semis at the Australian Open and Roland Garros, where she lost to Sharapova. She said her game had progressed since then and vowed to maintain her trademark aggression and power hitting against Sharapova, who she idolised as a child. “I definitely want to keep playing my game no matter what. Really kind of take it to her, go for my shots,” she said. “That’s what I want to do on the court. And it’s more fun when I play that way too.” The glamour pair have reached the final eight in vastly different styles, with Sharapova building momentum after an early scare to concede only five games in her last two matches. She has eliminated two seeds while Bouchard has been erratic even though she is yet to encounter a top-ranked player at Melbourne Park. The Canadian has been scintillating in patches but also struggled with her serve accuracy.

Halep, 23, has also not faced a seed on her way to the quarters, She has struggled at times to impose herself on lesser opponents, shouting at herself on court, but is still yet to drop a set. The nuggety Romanian reached the quarters last year and can go one better this year if she reproduces the form that delivered her ninth WTA title at the Shenzhen Open this month. Halep said she was full of self-belief after reaching the final at Roland Garros and the semis at Wimbledon last year. She defeated Makarova in their only previous meeting at New Haven in 2013 “I have confidence I can beat her again but it’s a quarter-finals and it will be a tough match,” she said.

The enigmatic Makarova has also not dropped a set but all her victories, including against Czech 22nd seed Karolina Pliskova, have come in convincing fashion. It is the third time the 26-year-old, who broke into the top 20 last year, has made the quarters at Melbourne Park after strong runs in 2012 and 2013. She has also appeared in the last 16 in 2013 and in 2011, making the Australian Open her most consistent Grand Slam. “I don’t know what it is, something special for me, but I’m really happy to be here,” said the Russian, who also make the US Open semi-finals last year. – AFP