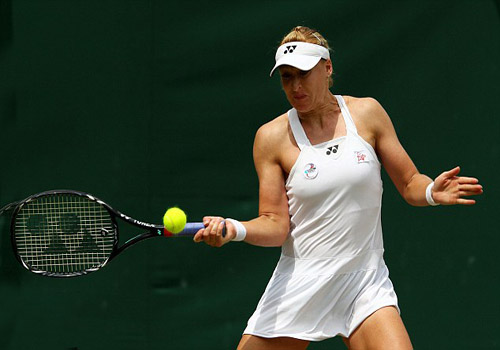 Great Britain’s Elena Baltacha has lost her battle with cancer at the age of just 30. The former British tennis No 1, who was diagnosed with cancer of the liver just a matter of weeks ago, died in the early hours of Sunday morning.

The sports star’s agents confirmed Baltacha had lost her fight, while her husband Nino Severino said he was ‘heartbroken beyond words’. In a statement released on behalf of her family, her agents, Eleanor Preston and Faye Andrews, said: ‘It is with deepest sadness that we bring you the following news — Elena Baltacha died in the early hours of Sunday, May 4, of liver cancer.

She was 30 years old. ‘Elena, who always went by her nickname Bally, was diagnosed with liver cancer in mid-January 2014, two months after retiring from professional tennis and just a few weeks after marrying Nino Severino, her long-time coach and partner. Baltacha, who topped the British women’s rankings for an astonishing 10-year stretch, was born in Kiev but spent her formative years in Scotland, where father Sergei played football for both St Johnstone and Inverness. Her mother, Olga, was an Olympic athlete and her brother, also Sergei, played for St Mirren. -Dailymail