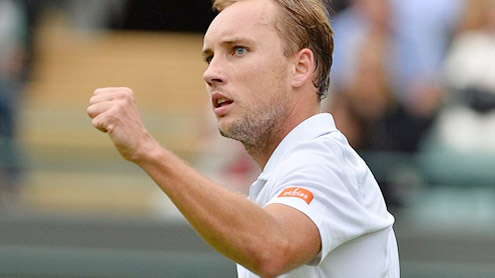 Name a famous Belgian, they always say. Well, Steve Darcis can join the likes of Hercule Poirot, Eddy Merckx and Audrey Hepburn for today at least, though probably not long thereafter.

The predetermined fate of the shock maker is to be here today and gone tomorrow. It is a measure of the tennis obscurity from which the Anderlecht supporter from Liege emerged that the BBC did not know whether to sound the ‘s’ at the end of his surname or use the pronunciation preferred by Jane Austen in Pride and Prejudice. The ATP handbook suggests the latter.

Nor did many seem to appreciate in advance of this stunning result that  Mr Darcis had already created an upset on these very courts, on Centre Court no less. He had played in the first match on the hallowed turf at the London Olympics and even managed a victory over  No 6 seed Tomas Berdych, an achievement that went pretty much unreported in these parts.

Even with the nickname ‘Shark’ you are not going to make waves as a Belgian tennis player in your late 20s and with a ranking of three figures.‘Who is this guy?’ people kept asking around No 1 Court, and increasingly throughout the land, in an echo of a repetitive piece of dialogue from the film Butch Cassidy and the Sundance Kid.He could play, all right. That was obvious from the outset yesterday, though no one initially imagined that his stylistic single-handed backhands and varied serve would penetrate the defences of Nadal other than intermittently and indecisively.

Darcis enjoyed break points on Nadal’s first three service games before eventually converting one to lead 6-5. Nadal broke back immediately to set up the first of the tie-breaks. Surprisingly, that went the underdog’s way.We might have known something was up. The first game of the match saw Nadal slip to the ground, serve two double faults and miss wildly with two forehands. A two-metre long forehand cost him the first set.The second set went much the same way. Ditto the tie break. This was getting serious for the two-time champion.

By then, Nadal seemed to be struggling with the knee injury which saw him sidelined for seven months after losing at Wimbledon last year.The signs became clearer and clearer: errors on his backhand as he struggled to bend on that side; running round in an attempt to play as many forehands as possible; an uncharacteristic inability to chase down balls.Finally, we saw the tell-tale limp, more and more pronounced as the match reached its conclusion. Nadal was literally and metaphorically limping out of the Championship. There was to be no classic warrior’s fight back.

‘It’s not a tragedy — it’s sport,’ declared Nadal afterwards.‘No one died out there,’ Boris Becker said after losing to Australia’s Peter Doohan in the second round in 1987.So much for the hugely-anticipated 2013 Wimbledon quarter-final between Roger Federer and Nadal, described by John McEnroe yesterday as the two greatest players in the history of tennis.Federer did his bit with a performance as impressive as Nadal’s was disappointing.This was the sixth occasion that Federer had opened Centre Court following the tradition that the defending champion be afforded the honour of playing there first.

‘It’s been an amazing day and match to be part of,’ said Federer. ‘And I see it also for the other players. They always think it’s super exciting being a part of that match.’It is doubtful whether the vanquished Victor Hanescu felt quite so thrilled. He could always think about it as a free lesson, in fact one where he earned £23,500 as a first-round loser.

Not a bad hourly rate. The easiest money he ever earned, though in a way the hardest given the humiliating manner of his 6-3, 6-2, 6-0 defeat.It was all over in 1 hour 8 minutes, one minute less than it took Nadal to lose the opening set of his match.We saw the complete array of Federer genius. But let’s not go overboard.This was by no means perfection. Federer was nought for two in challenges — he has always been useless at using Hawk-Eye, believing it to be one-eyed compared to his own 20-20 vision.The Swiss will not be telling his grandchildren about yesterday.

Darcis might be. ‘First I will try to get the DVD of the match and keep it at home,’ he said.It would sit alongside a recording to his Olympic win on Centre Court.And to think his first reaction on hearing the draw had been: ‘S***.’As to the nickname, he has always been fascinated by sharks to the extent that he boasts a tattoo of one on his shoulder.‘My astrological sign is fish. I love sharks. It’s like an S, like Steve,’ he said.Very good, Steve, as the Russian meerkat says. No. Beating Nadal is excellent, Steve. – DailyMail