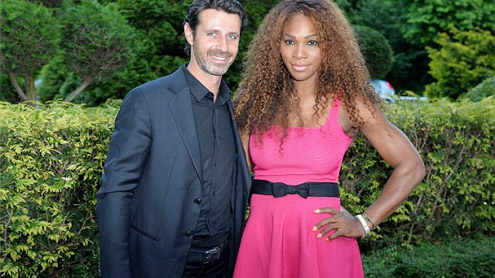 The 29 consecutive victories of Serena Williams tell of someone who could not be happier or more motivated, and a major reason for that is becoming increasingly apparent.

Her coach Patrick Mouratoglou posted a picture of them on Wednesday, arms entwined, at Tuesday’s prestigious ITF Champions’ Dinner, seeming to confirm one of the worst-kept secrets in tennis: that theirs goes well beyond a pure player-coach relationship.

Results have reflected the stability he has brought to her, and after just two defeats all year Williams goes into today’s semi-final of the French Open against Italy’s Sara Errani a very strong favourite.Whatever it is between her and her coach, it is clearly working for Serena, who in the space of a year has gone from suffering her worst loss at a Grand Slam to sweeping all before her, coinciding with her hooking up alongside one of Europe’s most high-profile coaches.

Williams’s career appeared to be unwinding when she went out to the little-known Virginie Razzano in the French Open 12 months ago and turned to Mouratoglou, who runs his eponymous academy on the outskirts of Paris that has seen many players come through its doors, including Laura Robson for a spell.Since teaming up with him, Williams has won Wimbledon, the Olympics and US Open and much of this must be put down to the influence of the debonair 42-year-old.The evolution of their relationship has been shrouded in mystery but what is known is that he was until relatively recently married, which is no longer the case.By September, in the post-US Open period when tennis is in a lull, pictures emerged of him and Williams, 31, strolling with an arm around each other through the French town of Valbonne.

In December they were in Mauritius together on a training camp for his top academy players and were pictured out on a boat holding hands.What he has managed to do is get her fully focused on tennis and it is notable that he is the first man that she has been involved with who is part of the tennis scene.Contrastingly, her last comparable surge of form was in 2002-03 when she won four straight Grand Slams, and she admitted that it was largely as a result of a failed relationship, with her wanting to show the unnamed man — believed to be Washington Redskins linebacker LaVar Arrington — what he was missing.Mouratoglou will not talk in detail about their relationship but he told Sportsmail: ‘If you remember there were many tournaments when you felt she wasn’t 100 per cent focused.

‘Since a year ago I don’t see her play one match without a real motivation to win it. Why is she motivated? That’s a difficult question for me to answer.‘She is very happy off the court, I think she is enjoying everything she is doing now.’ As for Serena, she speaks fondly of him. ‘He’s helped me a lot. He loves tennis too much, it’s kind of crazy,’ she said this week.‘He says some things I don’t agree with but we kind of feed off each other.’She jokingly admits that, culturally, it may be a case of opposites attracting. ‘There are jokes about  Americans and about me and how we want things,’ she added. ‘When we go into a restaurant I’m like, “I want it now”, but when you come to Europe everything is slower.‘So I have to slow down and take a deep breath. It’s kind of funny how different the cultures are.’ – DailyMail