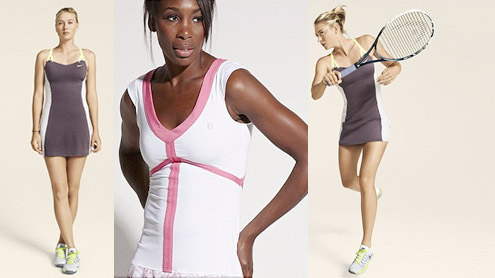 As the second Grand Slam of the year approaches, the world’s top tennis players are making their final preparations – as well as revealing the all-important outfits they will be wearing in one of the world’s most fashionable cities.

The French Open gets underway on Sunday in Paris and the capital city has seen a hive of tennis-related activity this week.Maria Sharapova revealed her new Nike custom outfit for the defence of the title she won last year, and Venus WillIams showed off her new dress from her own clothing line, EleVen by Venus Williams, which she described as ‘the perfect combination of feminine and sporty’.Sharapova has recovered from the illness which forced her to withdraw in Rome last week and will be seeded second below Serena Williams, who is the hot favourite on a career-best winning streak of 24 matches after winning her last four tournaments.

Serena’s older sister Venus, ranked No 30, may not quite be the force she once was – she lost to British 19-year-old Laura Robson in the first round in Rome – but the 32-year-old has been successful at Roland Garros in the past, winning the event in 2002.Robson, Heather Watson and Elena Baltacha are the only British players competing in Paris after Johanna Konta was knocked out in the second round of qualifying. The Australian-born Brit lost 4-6, 6-3, 7-5 to Kazakhstan’s Galina Voskoboeva.World No 1 Novak Djokovic and 17-time Grand Slam champion Roger Federer were focusing on matters on-court as they practiced at Roland Garros.

Djokovic comes into the event off the back of two disappointing defeats against Grigor Dimitrov and Tomas Berdych in Madrid and Rome respectively but will take confidence from his victory over Rafael Nadal in the Monte Carlo final last month.31-year-old Federer reached his first final of the year in Rome last week but suffered a crushing 6-1, 6-3 defeat to rival Nadal in 69 minutes.

Following the withdrawal of world No 2 Andy Murray, seven-time champion Nadal will be seeded third and will potentially meet either Djokovic or Federer in the semi-finals, depending on which half of the draw he is placed in on Friday.World No 8 Jo-Wilfried Tsonga will hope to end France’s 30-year Grand Slam drought – Yannick Noah was the last French winner of a major in Paris in 1983 – and he enjoyed some fun off the court, teaming up with 2008 Roland Garros champion Ana Ivanovic to sign some autographs. –  DailyMail