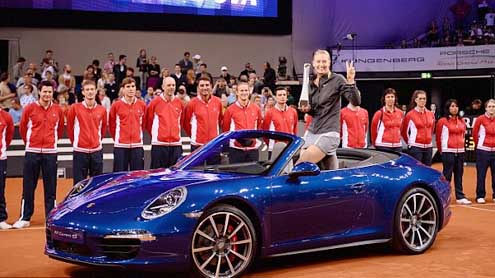 The top-seeded Russian swept to her second title of the year after winning in Indian Wells, and became the first player to retain the Stuttgart title since Lindsey Davenport in 2005.And, for her troubles, Sharapova was awarded a blue convertible Carrera, just days after she became a brand ambassador for the car manufacturer.’I thought it’d be the toughest match of the tournament, but I played my best tennis today,’ Sharapova said. ‘I was able to step it up.’Sharapova used the Stuttgart tournament as her first clay-court event of the season, just like last year when she went on to capture the French Open.

The second-seeded Li double-faulted on match point and had another one earlier in the final game, as Sharapova collected the 29th title of her career – and a sports car to go with it.’I was under pressure on her return, she was aggressive,’ Li said. World No 2 Sharapova had to fight through three long matches to reach the final, but there was little drama in the final on Sunday.The Russian opened with a break and went up 4-1 before Li pulled back one break. But that was not enough and Sharapova closed out the set with a service winner.

‘I tried to put it together from the start,’ Sharapova said.Li, who became the first Chinese player to win a Grand Slam title with her victory at Roland Garros in 2011, simply didn’t have enough consistency to threaten Sharapova, and the Russian gained the key break in the seventh game of the second when Li sent a volley wide.’I’m a little sad to lose but it’s a pretty good start to my clay-court season,’ Li said.Sharapova now leads the head-to-head record against Li 9-5. It was her 16th consecutive win on clay, dating back to Rome last year. Since Stuttgart last year, she is 23-1 on clay. Her only loss was to Serena Williams in Madrid. – DailyMail