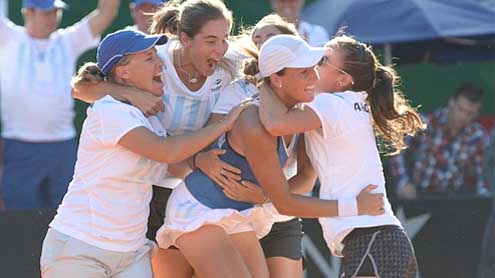 The biggest gamble of Judy Murray’s captaincy failed to deliver on Sunday night when her decision to put her faith in the massively-undercooked Elena Baltacha saw Great Britain stumble to shattering defeat against Argentina in the Fed Cup.

The former British No 1, who had played just one match since undergoing ankle surgery following the Olympics, was drafted in on Sunday to replace Jo Konta to try to take their World Group promotion play-off to a fifth and decisive double rubber.But the former top 50 player, suddenly charged with levelling things after Laura Robson lost to Paula Ormaechea, went down 7-5, 3-6, 6-1 to 25-year-old journey woman Maria Irigoyen to seal the Aegon GB team’s fate.To the delight of a small but passionate crowd, who had been officially warned about hollering between first and second serves, Argentina retained their status while GB missed out on World group level for the first time in 20 years.

Murray said: ‘It was a bit of a risk because Elena had not played much, but she was playing so well in practice and she is such a warrior.‘I thought if the crowd were loud in our faces, which they were, then she would be able to deal with it. I don’t think it bothered her as much as it did Laura. They created a great atmosphere but it was not something we are used to.’The visitors were unable to overcome the double headwind of an awkward draw on slow clay and the absence of Heather Watson, still recovering from glandular fever.

But they would still have expected to make superior ranking count.After Robson, again out of sorts, had fallen 6-4, 4-6, 6-2 to a player ranked more than 100 places below her, it fell to Baltacha to fill the Watson-shaped hole and, try as she did, she could not suppress unorthodox left-hander Irigoyen, listed a modest 202 in the world.No one will know if the choice to ditch debutant Konta, after her opening-day defeat, and overlook Anne Keothavong was the difference but the outcome was a letdown for a well-prepared British side. Baltacha was the exception, arriving with a chronic lack of game time.She had chances early in the first set and when she edged the second and broke in the first game of the decider the switch looked inspired.

Six games later, with the determined Scot looking mentally and physically spent, it simply did not.Robson clearly has issues with her tennis at the moment which, at the age of 19, are far from insurmountable but may lead to downward revisions of what can be expected from her in the medium term.She does not appear to be enjoying herself much on court and is certainly not relishing the battle.

The lack of belief shows up most in deciding sets. This was a tiny improvement but much work still needs to be done on her fitness and movement, accentuated by the clay.Robson said of the crowd noise around her serve: ‘It was tough sometimes but I was expecting it. I could have made life easier for myself by not missing so many first serves.’Judy Murray added: ‘We are absolutely gutted because we thought we could win and it was a great opportunity. I’m proud of the way Elena fought and I thought she was quite close to pulling it off. ‘The crowd created a great atmosphere even if it was loud at times, I think we will be better for the experience.’ – DailyMail