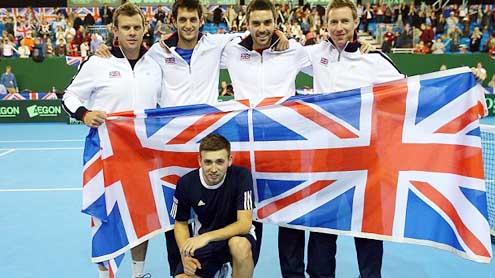 James Ward was left on a hospital drip yesterday after his Davis Cup exertions for Great Britain.

The British number two was on court for over seven hours as he played two five-set matches in the team’s impressive 3-2 win over Russia.That result put Great Britain in the World Group Play-offs but the impact on Ward was less positive.He told lta.org.uk: “I thought sleep would help me recover from the weekend but by yesterday afternoon I wasn’t feeling too good so I went to my local A and E.

‘The staff there were great. They put me on a drip and let me go at midnight. I’m feeling much better today and I’m still hoping to make it to the States next week.’Davis Cup captain Leon Smith hailed Ward’s commitment to the cause.He added: ‘It just goes to show quite how much James left out on the court against Russia. He gave it everything, as did all the players.’ – DailyMail