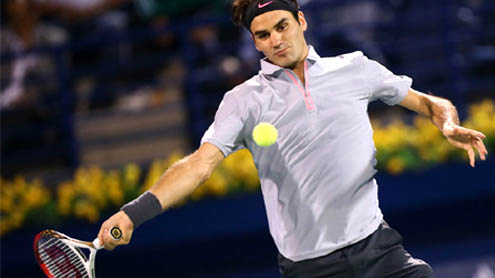 The 17-times grand slam champion has an 18-2 winning record against the Russian veteran and could be forgiven for already eyeing a potential showdown with world number one Novak Djokovic in Saturday’s final. On Wednesday, after the first five games went with serve, Granollers stumbled, a double fault gifting Federer three break points.

The 31-year-old needed only one, passing Granollers at the net with an arrowed forehand down the line. Federer, seeking a first title of 2013 and a sixth Dubai crown, was relentless, regularly opting for serve-and-volley tactics, and wrapped up the set with a love game. Federer broke again for a decisive 3-2 lead in the second set courtesy of a deep forehand that the Spaniard thought had landed long but his appeal fell flat.

Earlier, world number seven Juan Martin Del Potro pounded Somdev Devvarman 6-4, 6-4. The Argentine saved three break points in his opening two service games but was otherwise largely untroubled in dispatching India’s number one. “It’s good, but I need to improve  if I want to have a chance of winning this tournament,” Del Potro said in a courtside interview.

The former US Open champion was taken to a deciding set tiebreak by Cypriot Marcos Baghdatis in Tuesday’s first round, saving three matches points along the way, but the Argentine was steadier against Devvarman, sealing the first set with an ace. Roared on by a raucous Indian following in the stands, Devvarman provided more resistance in second before a long backhand sealed his fate.Del Potro, 24, lost a year of his career with a wrist problem and he admitted the fear of aggravating the injury was causing him to change his playing style. “Sometimes I get frustrated because I can’t hit the ball like I want it,” the Argentine told reporters.

“I’m not going to put myself at risk again.” Third seed Tomas Berdych, 27, was also through to the last-eight, beating Germany’s Tobias Kamke 7-5 6-1 under a searing desert sun. The Czech toiled more than the score line would suggest, squandering five set points in the first set against the world number 90 and saving 12 of 14 break points himself. Djokovic will play Spaniard Roberto Bautista Agut in Wednesday’s late match. – DailyTimes