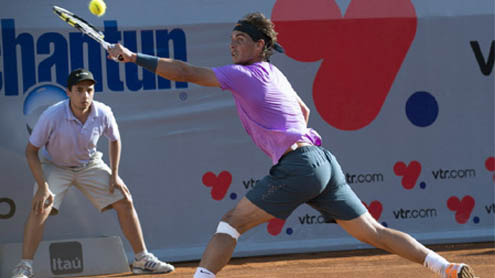 VIÑA DEL MAR: Rafael Nadal made a triumphant singles return after a seven-month absence, beating qualifier Federico Delbonis 6-3, 6-2 in the second round of the ATP claycourt tournament here.

“I’m happy to play a singles match after so long,” Nadal said. “I need days and time to get my game back, but so far the feeling on court is great. “For now the most important thing is to spend as much time as possible on court. This victory allows me to play at least two more matches, singles and doubles.”The 11-time Grand Slam champion from Spain hadn’t played singles since a shock second-round exit from Wimbledon in June, although he warmed up here on Tuesday with a doubles win. A torn tendon and inflammation in his left knee had kept him out of the London Olympics and the 2012 US Open, while a virus further delayed his return to action this year.

The rust was showing as Nadal, now ranked fifth in the world, dropped his serve in the first game of the match and quickly fell into an 0-2 hole to the left-handed Argentinean. But he rebounded in style against his 128th-ranked Delbonis, regaining the break in the fourth game before prevailing in a hard-fought eighth game to give himself a chance to serve for the opening set. He raced to a 4-0 lead in the second, seeming to move with ease around the sun-splashed red clay court – even when racing to the net after drop shots. He locked up the match after 87 minutes coming up with four aces and facing just one break point.

Former world number one Nadal, playing with the familiar band of tape around the bottom of his left knee, had looked keen to get things underway as he danced on the balls of his feet during the coin toss, wearing a bright purple shirt and gray shorts. He had vocal supporters in the packed grandstand as he made his first appearance in eight years in Latin America’s “Golden Swing” of tournaments.

In the quarterfinals he’ll face either compatriot Albert Montanes or another Spaniard Daniel Gimeno-Traver. Nadal, who has claimed seven of his 11 Grand Slam titles on the clay courts of Roland Garros, is slated to play clay tournaments in Brazil and Mexico before heading up to the United States for the Masters Series events in Indian Wells and Miami on the hardcourts that are more wearing on his knees. – DailyTimes