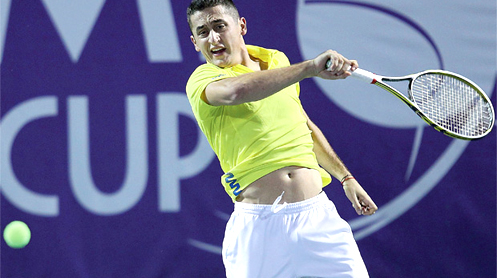 World No.11 Nicolas Almagro of Spain has replaced compatriot Rafael Nadal, who pulled out of the Mubadala World Tennis Championship because of a stomach virus.

World No.4 Nadal pulled out at the last minute and the organisers IMG were forced to activate their ‘Plan B.’IMG Middle East Managing Director Greg Sproule also revealed that Roger Federer, who was not part of this year’s line-up was also approached.Spanish star Almagro with make his debut in Abu Dhabi as a direct replacement for Nadal.

He will join world No.1 Novak Djokovic, reigning US Open Champion and world No.3 Andy Murray, world No.5 David Ferrer, world No.6 Tomas Berdych and world No.9 Janko Tipsarevic.IMG also confirmed the match schedule will remain unchanged with Almagro directly taking the place of Nadal in the semifinal on Day 2 on Friday, where he will play the winner of the Murray-Tipsarevic match.

“Nicolas Almagro is consistently amongst the leading players in the world and comes to Abu Dhabi off a career high season.  He’s an excellent addition to an already extremely strong player field and we are pleased to have him joining us at the event. This year’s player field is among the best of the tennis season. Outside of the Grand Slams you would be hard pressed to find a draw with five of the top-10 players in the world.

With US Open Champion and Olympic Gold medalist Andy Murray playing on Day 1, and World No. 1 and defending champion Djokovic competing on Day 2 this should be a memorable three days of tennis here in Abu Dhabi,” Greg Sproule said.“We spoke to a number of players, also to Roger Federer. Federer is a great friend of the championship. But he plans his schedule well in advance. He is coming off a hard tour of South America so he is not yet ready to play. He is presently in Dubai. We would love to have him come back and play someday,” Sproule added.

“Frankly, we are disappointed that Rafa (Rafael Nadal) can’t join us. He has played here every year. Rafa himself is disappointed. His knee is fine but he came up with a stomach virus. But the show goes on,” he said.Almagro joins the stellar player field having ended the 2012 season ranked among the World’s Top 15 for 3rd straight year, highlighted by a personal-best 58 match wins, 2 ATP World Tour titles and a 5-2 record in Davis Cup play in leading Spain to the final.

“This championship has gained the reputation of being one of the elite events in the region and I am excited to be able to join such a great group of players here in Abu Dhabi. This already has the feel of a Grand Slam quarterfinal and will be great preparation for the upcoming season,” Almagro said in a statement. IMG also said that there were limited tickets remaining for Day One and Three. Day Two is already sold out.Murray takes on Serbian superstar Janko Tipsarevic followed by David Ferrer and Tomas Berdych on Thursday. – Khaleejnews