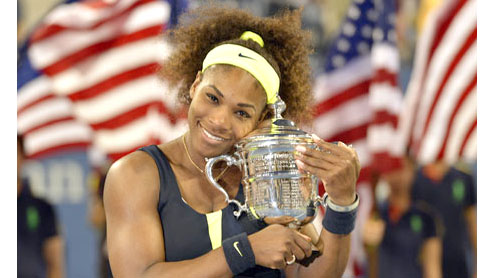 All the weaknesses and wonders of the women’s game were on display on the Arthur Ashe Court at Flushing Meadows on Sunday night as Victoria Azarenka came within a shot or two of winning just her second match in 11 attempts against Serena Williams, US Open champion for the fourth time.

The world No1 soaked up 13 aces and served four double faults yet several times was on the verge of victory. Williams won 6-2, 2-6, 7-5, in two hours and 18 minutes, statistical shorthand that inadequately reflects the rolling drama.The greatest serve the women’s game has seen was again the building block of Williams’s game. Only Tatjana Malek had matched her fastest serve, 124mph. On Sunday, Williams hit a peak of 125mph. And still she struggled.

For the first half an hour the American threatened to bury the Belarusian as convincingly as she had embarrassed the diminutive and ace-less Italian Sara Errani in a little over an hour in the semi-finals. Within an hour, they were engaged in a dog-fight in the third set. As the two-hour mark arrived, Williams was serving to stay in the match. A quarter of an hour after that, she had won it. Along the way, there were some brilliant individual winners – 13 by the loser, 44 by the winner, many of them spectacularly hit from the back of the court, but at the cost of 45 unforced errors – and plenty of decent ralliesThe lingering impression was one of an error-riddled contest, compelling though it was at the end.At 3-5, down, Williams needed a couple more of those aces to stay in the game. None arrived, but she survived. Serving for the match, Azarenka lost focus and gave up three break points. She saved one, but dropped serve and anxiety set in.

In the 12th game, a forehand floated long and Serena had match point; when Azarenka over-cooked another one, it was all over.How different it all looked at the beginning. Within minutes, Azarenka was defending two break points, then dropped serve. After 20 minutes, Azarenka trailed 1-4, as Williams powered two aces past her to go with the 50 she had already hit in the tournament, 13 more than Sharapova. Soon Azarenka was 2-5 down and serving to stay in contention.

Even without the ball in hand, Williams was lethal, leaving her younger opponent rooted to the spot all along the baseline. A long, cross-court backhand won her the first set in 34 minutes. Azarenka had a glimmer of encouragement when Williams double-faulted to drop serve at the start of the third, only her third such hiccup in the entire tournament – and then things began to unravel for both of them.

Williams won her first major on this court 13 years ago when she was just 17 and the No9 seed. Her career has been glorious, curious and furious. She has excited and irritated, but she has invariably bounced back. Surgery to her left knee in 2003 kept her out of tennis for eight months; three years later she missed a further six months after more trouble with her left knee. She nearly died from the post-operational fallout of a cut foot suffered in a Munich restaurant after winning Wimbledon three years ago. At 30, she is still standing. This is some woman, some champion. – Guardian