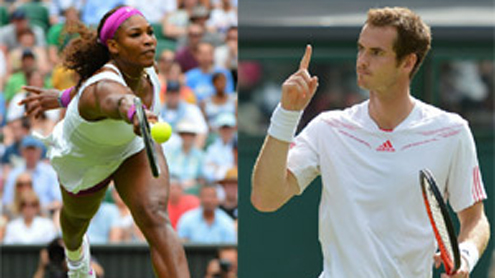 LONDON: Andy Murray survived a trip into Wimbledon’s land of the giant on Thursday to reach the third round while Maria Sharapova and Serena Williams ganged-up on Gilles Simon in the equal prize money sexism storm.

Former champions Sharapova and Williams took drastically different routes into the third round. Top seed Sharapova, the 2004 champion, had to dig deep to clinch a gritty 7-6 (7/3), 6-7 (3/7), 6-0 victory over Bulgaria’s Tsvetana Pironkova, a semi-finalist in 2010 and quarter-finalist last year. Sharapova, playing her first tournament since her maiden French Open triumph, had recovered from 5-2 down to take the first set and had just broken to move 3-1 ahead when the tie was suspended due to bad light on Wednesday evening. On the resumption, Pironkova belied her ranking of 38 to level the tie as the Court One crowd sensed an upset.

It was the first set the 24-year-old had snatched from the Russian in four meetings, but Sharapova took her 2012 three-set record to a perfect nine from nine by racing through the decider. She will next face Taiwan’s Hsieh Su-Wei as last year’s runner-up tries to reach the Wimbledon final for the third time. Four-time champion Williams reached the third round with a 6-1, 6-4 demolition of Hungarian qualifier Melinda Czink and next faces Chinese 25th seed Zheng Jie, who she beat in the 2008 semi-finals, for a place in the last 16.

But instead of discussing their tournament prospects, the two All England Club A-listers aimed their fire at French world number 13 Gilles Simon who reignited the equal prize money row by insisting that the men should be paid more because their events were more popular. “No matter what anyone says, or the criticisms that we get, despite everything else, I’m sure there are a few more people that watch my matches than his, so….,” said Sharapova in an ice-cold put down. But Simon, who was knocked out by in straight sets by Xavier Malisse, was unrepentant, claiming that he has the silent support of the locker room. Andy Roddick, a three-time runner-up, went through to the last 32 with a 6-3, 7-6 (7/1), 6-3 win over Germany’s Bjorn Phau and will face Spanish seventh seed David Ferrer who put out France’s Kenny De Schepper 7-6 (7/1), 6-2, 6-4.

Women’s ninth seed Marion Bartoli of France, the runner-up to Venus Williams in 2007, was knocked out by Croatian qualifier Mirjana Lucic, 6-4, 6-3. Lucic was a semi-finalist in 1999 before her career and personal life went into a tailspin. But, at 30, she is enjoying a new lease of life on the tour. Kei Nishikori, the 19th seed, became the first Japanese man to reach the third round for 17 years by beating France’s Florent Serra 6-3, 7-5, 6-2.-Dailytimes