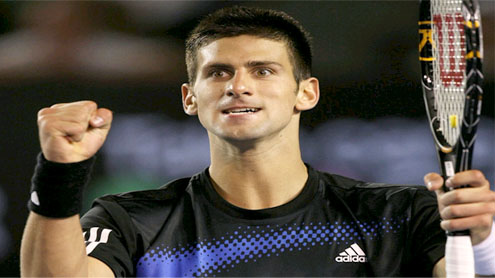 World number one Novak Djokovic is eyeing his historic fourth consecutive title at the Dubai Duty Free Tennis Championship, which begins on Monday.

The Serbian, who won five Grand Slam titles and has been enjoying a dream run since last year, will face Germany’ Cedrik-Marcel Stebe in his first match here.While talking to reporters at a round table conference at the Burj Al Arab on Sunday, Djokovic said: “Every tournament is different and every year is different obviously. I am looking forward to this week. I have been always playing my best tennis in Dubai. I had a lot of success in the last couple of years. So I have a reason to believe that I can perform equally well this year.

“Any kind of history is a blessing. It is something each player searches for and if it happens I would be very happy. I just feel really well here in Dubai. I am always being welcomed like at home.  The people are very kind, especially the people who are in charge of organisation here – they are doing a great job in always attracting the world’s best players and you can see that especially with this year’s main draw.

“You have all 7-8 out of the top 10 players taking part in this event. So that says enough. It’s going to be a very good week. You always have very good and intensive matches here and the attendance is great. It is the 20th anniversary of the tournament. It is going to be most special.”Novak is also quite keen to watch the performance of his 20-year old brother Marko, who has received a wild card here.“We have done our preparations for the last three years together.

We have managed to get him a wild card here in Dubai and I am very thankful to the organisers for giving him an opportunity. It is going to be his biggest match in his career. He has been struggling a lot with injuries in the last couple of years. I will be watching him tomorrow so I will try to be bit of a coach, but no coaching during the match. My younger brother is doing well, playing a lot of junior events. He is 16 years old.”

He is quite confident about winning the majority of matches ahead. “Any tournament I play I  aim to win it and I have been experiencing the best time in my career and I have been at the peak of my form. I believe that I can win most of the matches that I play. I always go with that positive attitude and I’ll keep on doing the good work.”While revealing the reasons to skip some of the European indoor tournaments, he said:

“Actually I have quite a few weeks before the Dubai tournament to prepare and after Australia is over. I have been not taking part in the European indoor tournaments in the last couple of years. I try to take a bit of rest after the Australian Open and prepare for what is coming up because after Dubai, you have Indian Wells and Miami – all really important tournaments.”

Asked about the opponent he would face first up, Djkovic said: “My brother grew up with him in juniors and he has been telling me a little bit about him. I have watched him play against (Lleyton) Hewitt in Australia. He has been impressive in that match. His attitude is great and he doesn’t seem to fear his opponent.“He comes out and he’s been very aggressive. It is going to be tricky.

The surface here and the conditions here are quite different from the other events. I find it faster than the other surfaces. He also revealed one of the reasons for his great run since last year. “The scheduling is one of the reasons why I did so well in 2011. So I will try to focus on my scheduling this year to find a way to play the important tournaments.”

The Serbian recently received his country’s top state honour — the Order of the Karadjordje’s Star of the 1st degree — from  the President Boris Tadic.“I have been very happy to receive the Laureus award and highest honour of Serbia just recently. The Serbian award is incredibly meaningful for me because it comes from my people.

I love to play Davis Cup and I love to represent my country in Olympic year.“We are really looking forward to be there and I would try to get a medal for my country. Serbia is a small country and has been through a lot of difficult times in the last 20-30 years. In a way I feel an extra responsibility as any athlete coming from my country to try to represent in the best possible way wherever and whenever we can,” he added. – Khaleejnews