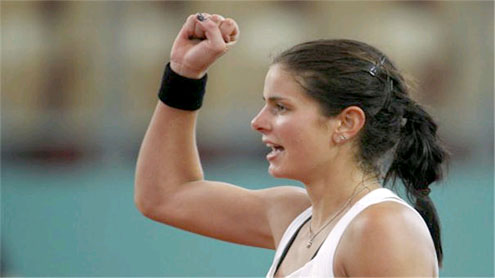 Germany’s Julia Goerges booked a second-round meeting with the world number one Victoria Azarenka at the Dubai Duty Free Tennis Championships after coming from behind to beat three-time finalist Svetlana Kuznetsova, of Russia.

Kuznetsova’s compatriot Maria Kirilenko had earlier sealed her spot in the next stage with a straight-sets success over Monica Niculescu, of Romania, 6-3, 6-0.Niculescu broke in the third game of the opening set to lead 3-1 initially, but Kirilenko hit back with five consecutive games — including two service breaks — to take the opener.That one-sided dominance continued thereafter as Kirilenko wrapped up the second set in 36 minutes, with three service breaks and holds apiece.

She will next meet either seventh-seeded Italian Francesca Schiavone or Ana Ivanovic, of Serbia.“I did everything right,” this year’s Pattaya Open runner-up said. “It was very windy; I think I found the way to play. Everything was working well for me and that’s why it was, kind of, an easy match for me.“I liked my forehand a lot. I played my forehand from each position of the court. I was just enjoying playing such a good forehand and having a lot of fun on court.“I have confidence because I’ve played so many matches in the last couple of weeks.” – Kahleejnews

A star is born