by ToP
in Tennis
1 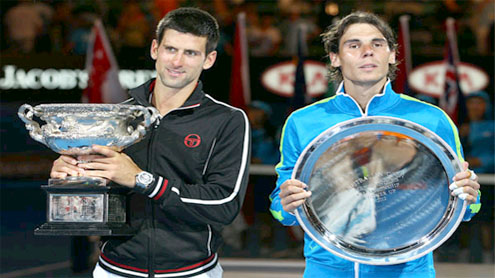 Djokovic sealed victory at 1.37 a.m. local time and became the fifth man since the Open Era began in 1968 to win three straight Grand Slam finals. hampionship, in Melbourne, Australia, early Monday, Jan. 30, 2012.- APThe 24-year-old Djokovic tore off his shirt in celebration after one of the most dramatic finals in the history of the game. He went to his support camp and repeatedly thumped the side of the arena in delight and relief.

Djokovic’s win maintained his mastery of Nadal, who has lost seven straight finals against the Serb since March last year.In the most devastating of circumstances, Nadal became the first man in the Open Era to lose three straight major finals. He lost in four sets to Djokovic at last year’s Wimbledon and U.S. Open.

After coming from 5-3 down to win the fourth-set tiebreaker, Nadal was up a break at 4-2 in the fifth set against Djokovic, who seemed to be tiring.But the No. 1-ranked Djokovic, who needed almost five hours to win his semifinal against Andy Murray, somehow responded. He broke for a 6-5 lead and saved a break point before finally claiming the win.

The previous longest major singles final was Mats Wilander’s win over Ivan Lendl at the U.S. Open in 1988, which lasted 4 hours, 54 minutes.The longest Australian Open final also involved Wilander in 1988, when the Swede beat Pat Cash.Nadal rested on the net before the trophy presentation.“Good morning, everybody,” Nadal said, earning laughs and loud applause from the stadium. “Congratulations to Novak and his team. They deserve it. They are doing something fantastic, so congratulations. – Khaleejnews