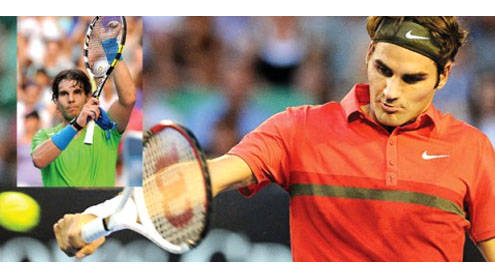 Rafael Nadal and Roger Federer stayed on course for a blockbuster Australian Open semi-final showdown with commanding victories on Sunday that put both through to the last eight.

The two tennis greats have not dropped a single set between them in Melbourne, scything through the draw, and neither looked remotely troubled in their last-16 matches on Rod Laver Arena.The Spanish world number two, who said he was improving with each match, made no mistake in his fourth round clash, dispatching compatriot Feliciano Lopez 6-4, 6-4, 6-2. He will play Tomas Berdych in Tuesday’s quarters.

All-time grand slam champion Federer ended Australian teen Bernard Tomic’s run with a clinical 6-4, 6-2, 6-2 win over the 19-year-old, leaving Lleyton Hewitt as the last remaining Australian in his home slam.Federer’s reward is a rematch of his losing 2009 US Open final against Juan Martin del Potro, while Berdych’s win over Nicolas Almagro was accompanied by boos from the crowd after the Czech player refused to shake hands.Nadal reached the quarter-finals at the Australian Open for the sixth straight year and said he was in the “right place” to chase his second Melbourne title after beating Federer in the 2009 decider.

“I’ve started the tournament playing really well this time. I felt I’ve played well from the first match and today I played another complete match,” Nadal said.”Now I’m in the quarter-finals. I am doing the right things. I am in the right place, right moment.”Nadal broke left-handed Lopez’s serve five times and dropped his service only once. He was always in control of the match, improving his record against his Davis Cup team-mate to nine wins in 11 meetings.”It was a very hot day and I think it’s a positive to win in straight sets, especially in these conditions,” Nadal said.

In the evening encounter on Rod Laver Arena Federer was pitted against the unconventional skills of Tomic, who regards the Swiss as the greatest player of all time and idolised him when growing up.Federer took control after a competitive opening set and needed 1hr 44min to wrap up a conclusive victory over the 38th-ranked youngster, whom he tips for great things.The Swiss legend broke Tomic’s serve six times and gave up his service once, dominating the evening contest with 45 winners to Tomic’s 13.

“I thought I played a really good match. I knew I had to, anything else and I wouldn’t have got the job done,” said the Swiss third seed, who is bidding for his fifth Australian title.”The score would suggest otherwise. If you hadn’t seen the match you would think straight sets, no problem, but I had to work extremely hard and Bernard showed why he is going to be a great player in the future.”Elsewhere in men’s round of 16 action, seventh seed Berdych was booed when he refused the traditional handshake after seeing off Spain’s Almagro in four sets.

Berdych accused his 10th-seeded opponent of deliberately hitting a ball at him while he was positioned at the net towards the end of his 4-6, 7-6 (7 5), 7-6 (7/3), 7-6 (7/2) victory.Towering Argentine del Potro continued his resurgence after career-threatening wrist surgery in 2010, reeling off a 6-4, 6-2, 6-1 win in just over two hours over unseeded German Philipp Kohlschreiber. – Khaleejnews