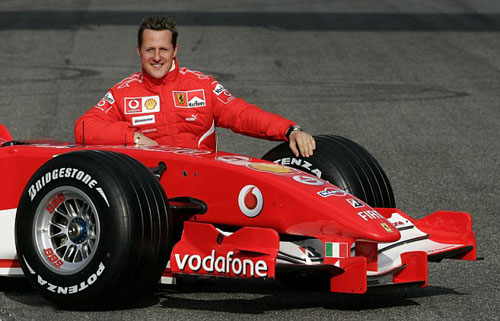 Schumacher in his Ferrari heyday, leading to him winning seven world championships

Michael Schumacher is finally out of a coma and has left hospital, his spokeswoman has confirmed . That Schumacher’s condition is improving six months after he suffered severe brain injuries in a skiing accident at the French resort of Meribel provides motor racing with the news it had hoped for but feared it would never get.

Schumacher, the seven-time Formula One world champion, had been in a medically induced coma since soon after hitting his head on a rock last December. After months without much firm news, Sabine Kehm said today: ‘Michael has left the CHU Grenoble to continue his long phase of rehabilitation. He is not in a coma anymore. ‘His family would like to thank all his doctors, nurses and therapists in Grenoble as well as the first aiders at the place of the accident, who did an excellent job in those first months.

The family also wishes to thank all the people who have sent Michael all the many good wishes. We are sure it helped him.  ‘For the future we ask for understanding that his further rehabilitation will take place away from the public eye.’ It is unclear whether Schumacher, 45, will return to his house in Switzerland or to a different, secret location.