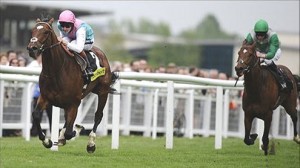 Frankel is set to be the hottest favourite for Saturday’s 2,000 Guineas since Nijinsky in 1970 after 15 colts were named in the big-race field.The one-mile race at Newmarket for three-year-olds is the first Classic of the British Flat racing season.Frankel, trained by Henry Cecil and ridden by Tom Queally, is unbeaten in five races and looked very impressive when winning at Newbury last time.Trainer David Simcock withdrew soft ground-lover Dream Ahead on Monday.

In 1970, Nijinsky, ridden by Lester Piggott, won the Guineas en route to a famous Triple Crown taking in the Derby and the St Leger.And there are genuine hopes Frankel, a horse with similarly imposing physical attributes, can do something similar just two years after the Irish-trained Sea The Stars also enjoyed a remarkable season as a three-year-old.Trained by Cecil at Warren Place just outside Newmarket, Frankel is out of Galileo, the champion three-year-old in 2001.With the favourite likely to start at odds of around 1-2, Frankel’s main opposition on Saturday is likely to come from Pathfork, Roderic O’Connor and Native Khan.Pathfork, trained in Ireland by Jessica Harrington, is also unbeaten having won his three starts at the Curragh.Roderic O’Connor is another Irish raider, representing the powerful Aidan O’Brien stable, but has already tasted defeat at the hands of Frankel.Native Khan won Newmarket’s Craven Stakes on 14 April and is trained by Ed Dunlop.But the colt will not be able to rely on the services of Kieren Fallon after the jockey lost his appeal against a 10-day riding ban imposed for not ensuring Sukhothai had “run on its merits” at Kempton on 13 April. – BBC

Petraeus ‘next head of CIA’, Panetta to lead Pentagon

Petraeus 'next head of CIA', Panetta to lead Pentagon