by Top
in Racing
0 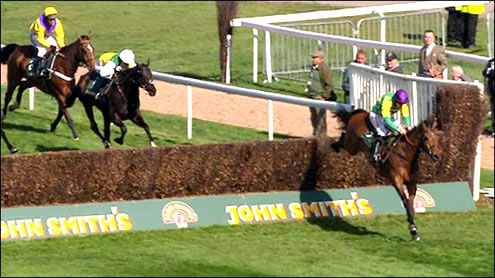 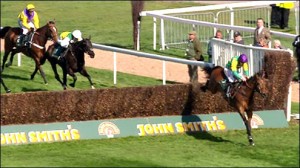 Dual former champion chaser Master Minded bounced back to his best with a masterful win in the Melling Chase at Aintree. The eight-year-old had been written off in some quarters after his defeat at Cheltenham last month, but put in an exhibition round of jumping on Friday at the Grand National meeting. Once Ruby Walsh sent the Paul Nicholls-trained chaser, an 11-2 chance, to the front, he revelled in the step up in trip to two-and-a-half miles. Last year’s winner Albertas Run was nine lengths behind in second with Somersby half a length further back in third. Master Minded won the Queen Mother Champion Chase at the Cheltenham Festival in 2008 and 2009, but flopped the following year.

After a rib problem and breathing operation, he returned to form with three wins earlier in the season before a late error in last month’s Champion Chase saw him unplaced behind winner Sizing Europe. Somerset-based champion trainer Nicholls decided to step Master Minded up from two miles, and he relished the challenge.

Bookmakers cut the French-bred horse’s odds for the King George VI Chase over three miles at Kempton in December to 4-1 from 10s behind 5-4 favourite Long Run, who won the Cheltenham Gold Cup last month. It was a nice lift for Walsh, who rides The Midnight Club in Saturday’s National, in which Nicholls saddles fellow leading contenders Nice Market and What A Friend. “It was a disappointing run at Cheltenham but, in hindsight, two miles is just a little bit sharp for him nowadays,” admitted Walsh. “He wants to go further and I would imagine that the King George would be his target now for next season.

“With him it’s no different from watching Lionel Messi or Ronaldo – you expect magic every day – and it is the same with Master Minded. It just can’t happen every day but he is a wonderful horse and the step up in trip is obviously helping him.” Owner Clive Smith, who also has four-time King George winner Kauto Star, said he was unsure whether he would like to see his two stable stars racing against each other at Kempton. “We will have to see how Kauto Star runs at Punchestown [in May], but the first time that he runs a bad race, he will be retired. I am just so pleased Master Minded has come back. He’s a champion.” Nicholls said he should possiby have run Master Minded in the Ryanair Chase at Cheltenham over two miles and five furlongs, rather than the shorter Champion Chase.

“That was brilliant, and we now have a new horse to take on Long Run,” he said. “Kauto Star has been to Kempton and got the video and the T-shirt, so now it is Master Minded’s turn. “He is next year’s horse and although he is still probably the best two-mile chaser in England, it’s clear that he now needs this longer distance and he’ll have his prep race for the King George over two-and-a-half miles at Ascot in November.” Later, Always Waining won the Topham Chase over the Grand National fences for the second successive year. The 14-1 shot’s victory was small compensation for his Welsh trainer Peter Bowen after the horse just failed to make the cut for the National. Mon Parrain, trained by Nicholls, had seemed on course for victory but was reeled in and had to settle for second ahead of Scotsirish and Gonebeyondrecall. Earlier, there was a boost for two other jockeys with rides in the Grand National.

Topolski took the opening novices’ hurdle under Daryl Jacob, who pairs up with What A Friend, the horse part-owned by Sir Alex Ferguson, on Saturday. Davy Russell, who is on Becauseicouldntsee in the National, just got Quito De La Roque home to beat Sarando in a stirring finish to the Mildmay Novices’ Chase. – BBC