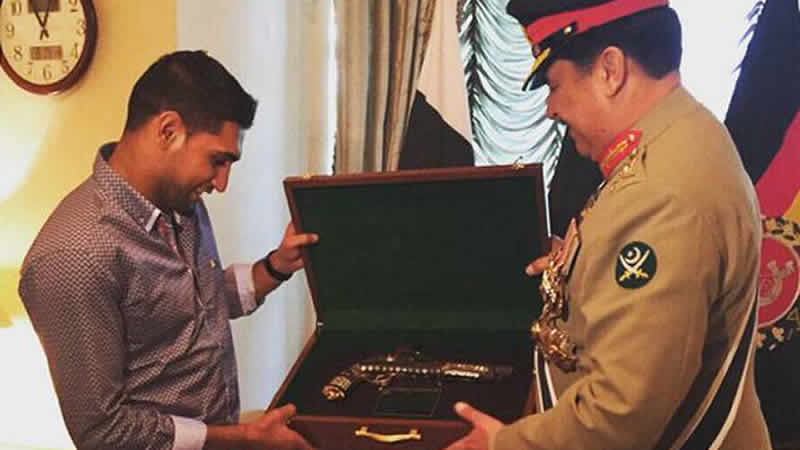 Just a few days ago, Amir Khan had presented a honourary title to the Army Chief on behalf of the World Boxing Council. Khan had lauded the efforts and achievements of Army Chief and the military against terrorism and presented the honourary championship belt for his services and efforts in maintaining the law and order situation of the country.

Amir Khan expressed his thanks to the Army Chief on Twitter saying “Thanks to Army Chief Raheel Shareef for the gift. Antique Old muzzle Loaded British Pistol” According to the inscription on the pistol case, it is the oldest pistol with pedigree and precious weapon of the 17th Century known as the ‘Colt’s 41Cal Pistol’ and ‘Lowmoor Single Shot’.

It is a percussion cap weapon which shows the skills of the early English pistol makers. It was used in the Battle of Waterloo and that War of Independence. It came to the subcontinent with East India Company. In 1839 during British advance to Afghanistan under Captain Wade, it reached Khyber Agency. ‘Afridi Tribe’ copied it, and started manufacturing it locally.