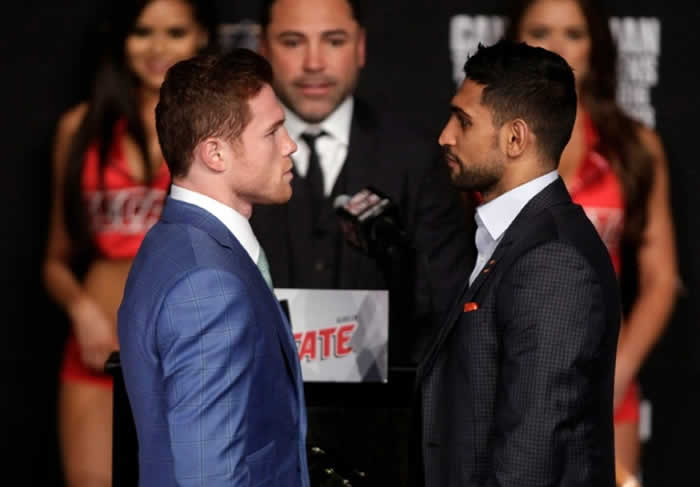 Amir Khan insisted Wednesday he is ready for the fight of his life when he steps up two divisions to take on Mexican world middleweight champion Saul “Canelo” Alvarez in Las Vegas this weekend.

The British boxer, who normally boxes at welterweight, faces a daunting battle against the hard-hitting Alvarez on Saturday in a fight which many believe is a risk too far for the 29-year-old from Bolton. However Khan insists he is relishing the prospect of star billing after enduring years of frustration trying unsuccessfully to land a bout against the now retired Floyd Mayweather and Manny Pacquiao. It s my time and I m going to grab it with both hands,” Khan told a press conference. It s been my dream to get a big fight like this in Las Vegas and I m not going to let it go.

Come this fight you re going to see the best Amir Khan. Canelo s a tough guy. He s strong but we re going to be ready for what he brings to the table,” added Khan, who is 31-3 with 19 knockouts. Khan, who is of Pakistani descent, also referenced the US presidential election campaign rhetoric of likely Republican nominee Donald Trump, who has vowed to bar Muslims from entering the United States while promising to build a wall on the US-Mexico border. Who knows? This could be the last fight for me and Canelo in Las Vegas if Donald Trump becomes president,”

joked Khan, a Muslim. World Boxing Council middleweight champion Alvarez (46-1, 32 knockouts) meanwhile said he was confident his power would be too much for Khan. I m very happy with the work that I ve done  he s a very fast, elusive, tricky fighter. I know the work I ve done and I m confident I can go in there and break him down,” Alvarez said through an interpreter. The bout s promoter Oscar De La Hoya described the fight at Las Vegas new T-Mobile Arena as a “classic case of speed versus power.”

De La Hoya insisted that the idea of a Khan upset was not outside the realm of possibility citing the example of Leicester City s remarkable title triumph in the English Premier League. Whovever thought that Leicester City, a 5,000-1 shot could win? Whoever thought that Muhammad Ali could knock out George Foreman?,” De La Hoya said. This is a fighter who is willing to fight the very best. There s a reason why Floyd Mayweather didn t want to fight him, why Manny Pacquiao didn t want to fight him.