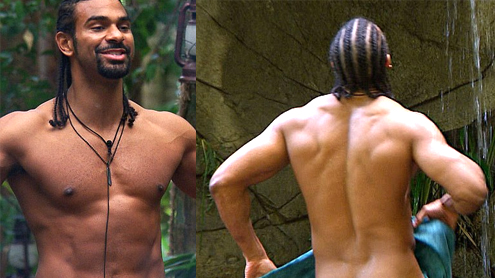 There is nothing sexier than a man who likes to keep clean… especially when he looks like David Haye.

And while Myleene Klass usually tops the sexiest shower polls, it’s safe to assume that boxing champion David has set a new benchmark for heart-stopping bathing sessions.The 32-year old was spotted doing what he does best – baring his bum – on Tuesday night’s episode of I’m A Celebrity.David has got his drying technique down to a fine art now, meaning legions of viewers sit waiting impatiently for a flash of his perfect, pert toosh as he rubs himself with a towel.

The former Heavyweight Champion has fortunately not lost too much body mass after his food intake was decreased during his time on the show, meaning there is still plenty to ogle.Along with his godly physique, David has shown off many admirable qualities during his time in the Australian jungle.A good sense of humour, generosity, kind manners and a fair character have pinpointed him as one of the most dreamy contestants in the show’s history.

And on Tuesday’s show, the married dad of one’s perfect man points skyrocketed when he was shown embracing his mum after successfully navigating a task involving five front doors.David and Rosemary Shrager chose the door that led to their family members, meaning they each had a few precious moments with their much-missed relatives. The boxer looked adorable as he was hugged by his mum, who looked glamorous with her long silver hair piled on top of her head.After reassuring her 6″3 boxer son that he hadn’t embarrassed her, she took the chance, in true mum style, to tell him he had shed the pounds and was now more of a featherweight.

‘I’m a cruiseweight now,’ he smiled.Jane Haye recently admitted that she had hoped her sportsman son would participate in Strictly Come Dancing.She told The Daily Star: ‘When he said he was doing this I said to him: “Why don’t you do the dancing show instead?”‘She also laughed about the interest her son’s rump was garnering, saying: ‘Bless his little bottom! It was just like he was a little baby again, but a bigger version. I thought he looked lovely.’Jane is in Australia with David’s dad, Deron, ready to meet him when he finally leaves the jungle camp. – Dailymail