by ToP
in Featured, Other Sports
0 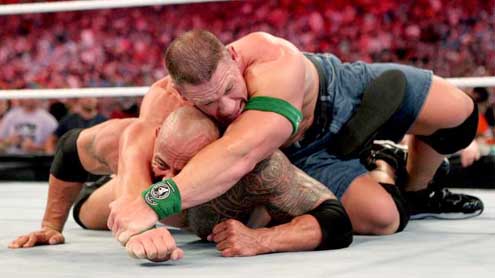 EAST RUTHERFORD, N.J: Finally, the time for boasts, for promises, for Q-and-A’s and point-counterpoints has come and gone, scattered to the winds of New Jersey like the last scraps of confetti blasted into the East Rutherford sky.

Finally, the doubters have been silenced, the haters quelled and a restless heart given peace. Finally, redemption has come, because when all was said and done, when all the pyro smoke had cleared and the final count slammed to the mat, John Cena hoisted the WWE Championship for the unprecedented 11th time, having fought tooth and nail to defeat The Rock in a titanic clash the WWE Universe had only thought they’d see once in their lifetime.

The odds were stacked against the Cenation leader from the get-go. The MetLife Stadium faithful rained boos down on Cena from the second he made his entrance and lavished The People’s Champion — whose history in New York and New Jersey is long and storied — with praise typically reserved for visiting dignitaries. Adding to Cena’s woes, fate initially seemed to share the partisan mood of the crowd, handing The Rock the advantage early on in the match. Although Cena struck first, it didn’t take long for The Great One to seize control of the contest, halting the Cenation leader’s momentum and sending him scrambling outside the ring to regroup within the bout’s opening moments.

That trend continued well into their WWE Title Match at the 29th Show of Shows, as Rock’s initial burst of dominance led into a blunt-fisted beatdown of Cena’s torso then a vice-gripped headlock of the redemption-seeking challenger. The strategy cut off Cena’s head of steam before he could even build to full power, threatening to derail his bid for redemption and leaving him looking, at least for a while, like he wasn’t sure what to do next. – WWE