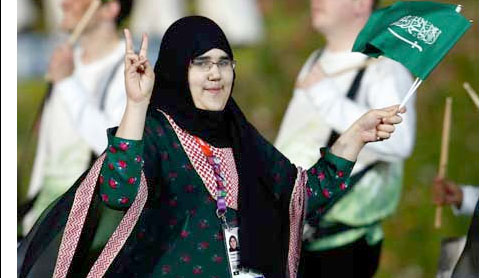 “It is a very important step. I think it is to be welcomed that the Arabian Gulf states have sent teams with women members in them and I hope that this will be encouraged for the future,” said Theresa May, the UK home secretary.Mrs May, who is also the minister for women and equality, said it was an issue “of particular interest” to her.Officials had threatened to ban Shaherkani, 16, one of two women in the Saudi team, on safety grounds, but an International Olympic Committee spokesman said yesterday: “The judo federation will allow her to wear something which will not compromise her safety, which I think they use for competitions in Asia.”

Mrs May also revealed how some of the lessons learnt from London’s Olympic experience so far have already led to a review of border and immigration control processes at Heathrow airport.”We will of course look at Heathrow generally as to how people get through borders,” she said.”We’ve got some arrangements already in place – we’re looking at how we can enhance the automated gates, looking at what we can offer business people coming through Heathrow.”With extra staff drafted in and Olympic Family immigration lanes opened up, the success of Heathrow’s Olympic operation has led some to call for a reduction of border controls after the Games to avoid queues returning to the levels that caused widespread outrage in past months.

Keith Vaz, chairman of the influential home affairs committee, said the home secretary should reinstate the “risk-based” checks that were piloted last year.Mrs May insisted she was not against such checks, but last year’s pilot had failed to provide concrete evidence that they reduced queuing time.”The results were not properly recorded, but theoretically risk-based checks aren’t necessarily the best in reducing queuing time because some people might get through more quickly but others will take longer,” she said.

In the weeks leading up to the Games, security plans came under intense scrutiny and criticism, particularly when it was revealed that the private security firm G4S could not fulfil its obligation to recruit enough security guards.The home secretary came under pressure as 3,500 troops were brought in to make up the shortfall.But Mrs May said yesterday: “All the publicity has been about venue security, which is primarily the organising committee’s responsibility and is about man-guarding, patting people down, checking handbags and so on.

“Set aside G4S and there are some huge positives in the overall security of the Olympics in terms of building in security as we were constructing the venues.”This knowledge and experience will, Mrs May hoped, prove part of the legacy of London 2012.She explained: “As well as the tremendous amount of police and intelligence work that has been done, security planning has been about building security into the venues themselves. That has been going on for years, obviously, so there’s a lot of experience that British business has in that area that we hope will be of use to others.”

It is, of course, far too soon to draw any conclusions from this London 2012 security experience. Mrs May and her security advisers meet every morning to go over the events of the previous day and address the day ahead. Measures are constantly under review. “It is my job,” she said, “to ensure that people have a safe and secure Olympics without security being too intrusive.”It is a delicate balance to find and one that has been years in the planning.”I will breath a sigh of relief at the end. So far it’s going well but we’ve got a long way yet to go.” – Theneation

Petroleum prices go up by Rs 7.67 per liter