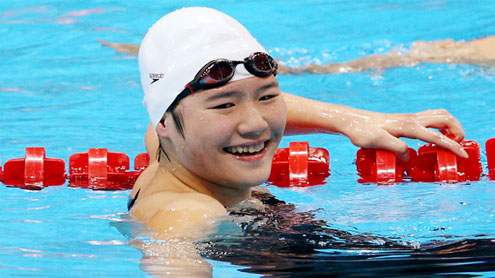 Ye Shiwen, the 16-year-old Chinese swimmer who has been the story of the pool in London, broke another record on Monday night.

Her swim in winning the 400m medley in world record time on Saturday had been described as “disturbing” by a respected US coach earlier in the day but the scrutiny being placed on her performance clearly did not affect her.She went quickest in the semi-final of the 200m medley in a time of 2 mins 08.39sec, breaking Stephanie Rice’s Olympic record by 0.06sec.

Ye broke the world record in winning the 400m individual medley on Saturday in a time of 4:28.43, taking more than a second off Rice’s record.It was not even supposed to be her strongest event: it is over 200m that she is world champion. What made her swim even more remarkable is that her final split time, of 28.93, was 0.17 quicker than that of Ryan Lochte in the men’s 400m medley earlier that evening.

John Leonard, the executive director of the World Swimming Coaches Association since 1989, said that the coaches he represents on the whole felt the swim was “unbelievable”. “I use that word in its precise meaning,” he said. “At this point it is not believable to many people.”Leonard and his organization have been at the forefront of fighting doping in the sport for the last two decades.In the Monday morning heat, Ye had delivered another remarkable performance.She comfortably beat a field containing Olympic champion Rice, Olympic silver medalist Kirsty Coventry and Britain’s Hannah Miley and even appeared to slow up on her freestyle leg — which was slower than the final 50m she had pulled out at the end of the 400m individual medley.

Her winning time of 2:08.90 was the same as she had recorded in winning the World Championships as a 15 year-old last year.Even without swimming in hard in the earlier preliminary heat, she was only 0.45 outside Rice’s Olympic record of 2:08.45, a time that was recorded before the ban on high-tech polyurethane suits. Still, that time is significantly short of Ariana Kukors’s world record of 2:06.15, which was recorded at the World Championships in Rome in 2009.Ye’s brilliant performances were branded “disturbing” by Leonard, who said that her performances brought back “a lot of awful memories” of Irish swimmer Michelle Smith’s winning performance in the 400m medley at the 1996 Olympics in Atlanta.

Smith, who married Erik de Bruin, the Dutch shot-putter who in 1993 was banned for four years for doping, was also banned for four years in 1998 after failing a drugs test.Leonard said that Ye “looks like superwoman. Any time someone has looked like superwoman in the history of our sport they have later been found guilty of doping”.Ye defended herself against those claiming her results were too good to be true. “The Chinese team keep very firmly to the anti-doping policies, so there is absolutely no problem,” Ye said.
“We want to be very careful about calling it doping,” Leonard said.

“The one thing I will say is that history in our sport will tell you that every time we see something, and I will put quotation marks around this, ’unbelievable’, history shows us that it turns out later on there was doping involved.”That last 100m was reminiscent of some old East German swimmers, for people who have been around a while. It was reminiscent of 400m individual medley by a young Irish woman in Atlanta.”Leonard made the point that Ye’s final 100m freestyle leg of the 400m medley was quicker than any woman had gone in the second 100m of a 200m freestyle race.”I have heard commentators saying ’well she is 16, and at that age amazing things happen,’” he said.  – Telegraph