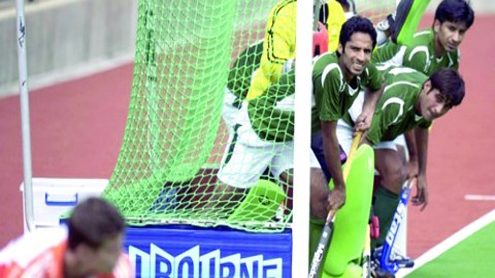 MELBOURNE – Pool B: Australia – Pakistan 1-0 (0-0 halftime)
Australia finished Pool B in second place after earning a 1-0 win against Pakistan in today’s final preliminary round game at the Champions Trophy in Melbourne. The win means that four-time defending champion Australia will take on England in Thursday’s quarterfinal match-up. Meanwhile, Pakistan will face Germany in quarterfinals after finishing Pool B in third place.

The Australia vs. England quarterfinal is sure to be one of the top games on Thursday as it will knock one of the two 2012 Olympic semi-finalists out of the medal race. Pakistan is also sure to have its hands full against #1 Germany in the other two vs. three quarterfinal match-up.The teams closed the first half in a scoreless draw despite some good chances on both end of the field. For the Australians the half was a continuation of offensive frustration from their 0-0 meeting against the Dutch and left the Aussies scoreless for more than 100 consecutive minutes of this Champions Trophy.It was Kieran Govers that at last broke the scoring silence for the Australians when he fired in a top shelf penalty corner goal with 20 minutes left in regulation. The Australians breathed a visible sigh of relief after finding the back of the goal and looked more relaxed and confident in the later stages of the game.

Today is a day off for all eight teams before the all-important quarterfinals on Thursday. The two top seeds from the preliminary round will take on the fourth-place finishers, while the second and third seeds will meet in the other two games. It is a must-win game for all teams, and with this year’s Champions Trophy having no clear dominant team, it is sure to be a thrilling day of hockey.

The Netherlands and Belgium are familiar foes back home on European soil, but today they found themselves half a world away in a wild west shootout as the Dutch hung on for a 5-4 win against Champions Trophy newcomer Belgium. The game was normal enough until a 15-minute span late in the first half and at the start of the second half that saw seven combined goals scored.

It was clear from the first whistle that the Dutch were on a mission to keep their hopes to win Pool B alive as they dominated the action throughout the first half. But they had to be calm with their attack and wait out Belgium before getting on the scoreboard.The patience finally paid off with 10 minutes left in the half when the Dutch fired in three goals to completely change the face of the game in the blink of an eye. Jeroen Herzberger easily flicked in a penalty corner in the 25th minute. Quirijn Caspers doubled the lead four minutes later and Tim Jenniskins struck with another penalty corner after time expired for the convincing 3-0 lead at the break.

Tom Boon woke up the Belgians in the second half, netting two goals in the first four minutes to cut into the Dutch lead. Boon’s first goal came on the first trip down field just 30 seconds into action and followed up with a penalty corner goal three minutes later to change the face of the game.The Netherlands replied in kind when Gauthier Boccard scored the quick 4-2 goal, but again Belgium had the answer with yet another penalty corner goal, this one coming from Alexander Hendrickx. In total, four goals were scored in the first six minutes of the half.

The teams exhcnaged goals in the last two minutes of the game. The Dutch scored on a penatly stroke from Valentin Verga and Belgium replied with a penatly corner just as time expired to bring the final to 5-4.The win keeps the Netherlands in the hunt for first place in Pool B, while Belgium is still looking for its first-ever Champions Trophy point with three losses in three outings. The loss locks the Belgians into fourth place in Pool B. They will face India Thursday’s quarterfinal.

India lost todays’s battle but won the Pool A war after suffering its first loss at this Champions Trophy in a 3-2 decision against Germany. The Germans earned the come-from-behind win, but India still won Pool A thanks to a better goal difference. As the top seed out of Group A, India will face Belgium in Thursday’s quarterfinal. Germany closes out the preliminary round in second place and will take on the third-place team from Pool B in its quarterfinal.

Germany’s win came thanks to a strong five minutes in the second half that saw them come from a 2-1 deficit to earn the 3-2 win on the strength of two goals from Tobias Matania.Gurwinder Singh Chandi kicked things off quickly when he stormed downfield and put in the quick 1-0 goal just four minutes into action. Germany calmly regrouped after falling behind and was eventually rewarded when one of the few veterans on the team, Oliver Korn scored on a strong second effort to bring the sides even at one.

India opened up the second half scoring when Nithin Thimmaiah deflected in a second effort penalty corner shot five minutes after the break. The Indian lead held for more than 15 minutes until Matania fired in his first marker The Germans took their first lead of the game two minutes later when Matania scored on penalty corner. The Indian pressured the German net through the last whistle, but couldn’t get the equalizer. Germany must await the outcome of today’s last game for its quarterfinal opponent.Today was the 600th game in Champions Trophy history

England finished the preliminary round at the Champions Trophy with one of everything after playing to a 1-1 draw against New Zealand today in the last day of Pool B action. The English squad, now with a 1-1-1 record, finished the preliminary round in a disappointing thrid place despite playing some solid hockey all week. New Zealand is now locked into fourth place in the group and will play the top-seeded team coming out of Pool A in Thursday’s quarterfinal.

It was a tame game on both sides with neither team showing the fire from of the previous days until late in the game after Phillip Burrows pulled the Kiwis even with his goal in the last seven minutes. Before the equalizer, the game’s scoring chances were few and far between.England took the 1-0 lead 11 minutes into action when Mark Gleghorne put in his first marker of the event on a streaking field goal effort. Beyond 1-0 goal, the scoring chances were few and far between in the first half as New Zealand missed its three penalty corner chances and England never really had a solid threat after taking the lead.

The pace picked up in the second half as New Zealand came out after the break reenergized and applied pressure on England. The English responded in kind and had a handful of opportunities, but they could not get the critical second goal. New Zealand jumped on the chance to get a point out of the game when Burrows showed his years of experience by calmly scoring the equalizer in the last seven minutes of action. New Zealand swarmed the English net after Burrows’ goal, but ultimately had to settle for the 1-1 tie and one point in Pool B action. – PT