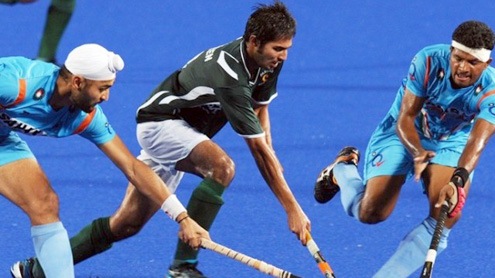 Although India defeated the Asian Games champions, their chances of reaching the final have virtually gone with only one more day of preliminary round matches on Saturday. India’s win over Pakistan was their 50th in 152 meetings and was a morale booster with Pakistan, last year’s runners-up, facing their worst performance ever in the cup as they have fallen to the bottom of the table. Pakistan team manager Akhtar Rasool said it was not his side’s day. “India was fortunate to score in the final minute, and it was a momentary lapse in concentration that cost us dearly,” he said. “We have always maintained that we are here to learn and correct our mistakes ahead of the Olympics… We just have to be patient.” There was no fancy play by either side in the match played under a steady drizzle. Sandeep Singh gave India the lead when they were awarded a penalty corner in the 31st minute.

Pakistan dominated the start of second half but their finishing was woefully off for the most part until they equalised in the 61st minute when Sohail Abbas sent a low drag flick into the goal. But just as the match was heading for a draw, Sunil Sowmarpet scored in the 69th minute, giving India a crucial win. “We deserve the win based on our performance and discipline in defence,” Indian coach Michael Nobbs said. “The timely tackles and tactical discipline helped us through this match.” New Zealand had their game all but sewn up by half-time, racing to a 3-0 lead thanks to goals from Ryan Archibald, Shea McAleese and Nick Wilson. The Malaysians pulled a goal back through Hafifi Hafiz Hanafi in the 45th minute to give them a glimmer of hope but the match was eventually put beyond their reach with a Shay Neal goal to make it 4-1.

Malaysia’s defeat mean they cannot qualify for the final as they are four points behind second place Argentina who they meet in the final round. The South Americans will be vying to add to their nine points to secure the right to play New Zealand, who have previously never made it further than third place, in the tournament which is an important warm-up for the London Olympics. Earlier, favourites Britain were held to a 1-1 draw by South Korea. South Korea opened the scoring through Yoon Sung-Hoon. But a goal by Jonty Clarke in the 50th minute followed. Britain have eight points, and they play Pakistan Saturday, while South Korea with five points will meet New Zealand ahead of the final Sunday. India have nine points and have no more fixtures. afp-dailytimes

Wetland Park to be built near Mai Kolachi