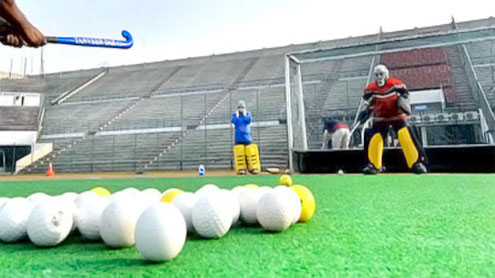 PESHAWAR: Punjab-A, Sindh and Punjab-B registered thumping victories against their respective rivals in the ongoing National Under-16 Hockey Championship being played here at Lala Ayub Hockey Stadium on Wednesday.

Punjab-A stunned Sindh-B in the one-sided encounter by 7-1, Sindh shocked Khyber Pakthunkhwa by 5-3 while Punjab-B defeated the new entrant FATA by 13-1 in one-sided affairs.In the first match Punjab-A and Sindh-B exhibited excellent display but Punjab after conceding the first goal managed their position and scored 7 goals by dominating the match. Punjab-A first raided the rival defence with a well-combine move through inside right Sohail Raza.Sohail Raza along with Mohid Malik and Sohail Riaz zoomed in to the danger zone where at the end Sohail made an attempt but was padded well by Sindh-B goal-keeper Bilal Sharif.

On the other hands, Sindh also made a combine move as result it was in the 17th minute when right-out Muhammad Azhar converted a penalty stroke. Center forward Sajid Ali was wrongly intercepted by Punjab-A deep defenders and umpire Kamran singled the spot in Sindh favour which was nicely taken by Muhammad Azhar into the right corner.

The lead gave Sindh new vigor but Punjab-A team managed their position and in the 19th minute Sikander tied the tally for Punjab-A on the field attempt. After leveling the tally Punjab-A put in more pressure and was succeeded in dominated the proceeding. Sohail Riaz scored two quick goals to make the tally 3-1. Punjab-A was leading by 3-1 at half-time and got position of the ball in the second session by scoring four more goals. Nohid Malik scored two goals while Ali Raza and Sheraz Hafiz scored one goal each to make the tally 7-1.

In the second match Sindh-A stunned Khyber Pakhtunkhwa-A by 5-2 in another thrilling match, Sindh took the lead through inside right Asif in the 9th minute followed two more goals by Muhammad Sargil, the right winger on the field attempt to make the tally 3-0. In the 23rd minute Nouman Jalil and Said Arshad scored one goal each to make the tally 5-0 in the first-half.Khyber Pakhtunkwha did not look set and failed to make any combine move, specially in the first session and thus Sindh finished the first-half with 5-0 lead.

It was in the second session when Khyber Pakhtunkhwa-A scored two quick goals through center forward Adeel in the 42nd and 47th minute on the field attempt. Khyber Pakhutnkhwa-A team tried their hard to reduce the margin but due to individual bursts they were failed to do so. It was in the dying moments when KP-A reduced the margin 5-3 by scoring a field goal. Thus Sindh won the match by 5-3.

In the third match of the day’s proceedings Punjab-B defeated FATA, the new entrant, by a dozen goal margin 13-1. Ibrar Bashir scored four individual goals including a hat-trick, the second of the Championship while Ali Raza, Atiq Ahmad, Sohail Anjum scored two goals each and Muhammad Qasim on the penalty stroke, Tala Hussain on the field attempt and Mohsin on the penalty corner scored one goal each.For FATA Sheraz Khan scored one goal on the penalty corner. Thus Punjab-B won the match by 13-1.
Today fixtures:
Balochistan vs Punjab-C at 11.00 a.m
Islamabad vs FATA at 1.00 p.m
Khyber Pakhtukhwa-B vs Sindh-B at 3.30 p.m – APP