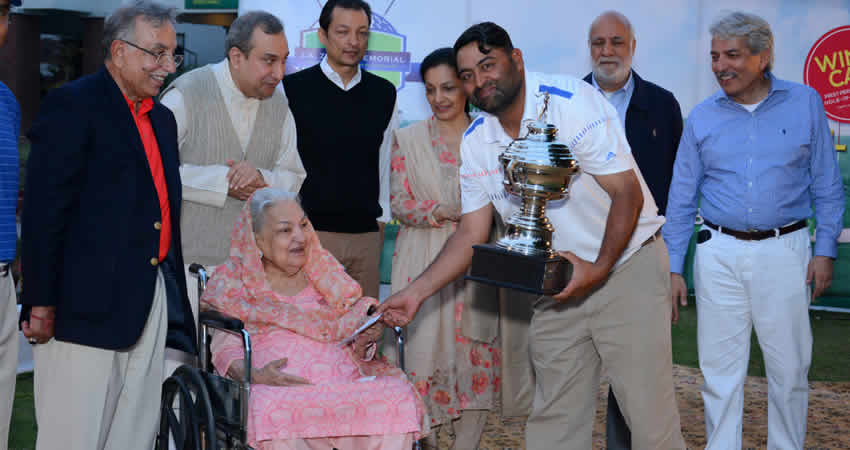 Muhammed Shabbir Iqbal of islamabad Golf Club remained unchallenged during the final round of this three rounds 3rdJ.A.Zaman Memorial Open Golf Championship at the historic par 72 Lahore Gymkhana Golf Course ,and through application of consistent excellence ,

He emerged as the ultimate victor in the 3rd J.A.Zaman Memorial Open Golf Championship 2016.

Once again during the final 18 holes on Sunday ,he maintained relentless control on the march to victory and through continuous application of golf hitting on the fairways and steady putting on the greens he had a final round of gross 68 which gave him a winning aggregate of 203,thirteen under par for the three competitive rounds.As for his nearest challengers ,Talib Hussain ,Matloob Ahmed and Latif Rafiq did make an attempt and tried to neutralize the magic of Shabbir but inspite of adept golfing on their part ,that did not happen.

The only consolation for Talib Hussain(CDA) was that he again had an underpar round of gross 70 on the final day and an overall score of 208,eight under par over the three days ,which fetched him the runners up prize.The defending champion Matloob Ahmed came third with a score of 209,followed by Latif Rafiq(Gymkhana)209,Shafiq Masih(Gymkhana) 212 and Ashaer Masih(Gymkhana) 212. The other professionals who performed notably were Sunny John 213,Muhammed SafdarKhan 213,Ansar Mehmood 216,and Mohammed Tariq and Shahid Javed Khan 217.. Imdad Hussain of Pakistan Railways won the seniors professionals title with a gross round of 66,with Muhammed Akram second through a round of 73.As for the Junior Professionals,Akash Masih came first and Usman Ali was second.

The race in amateur section was won by Robin Bagh of MianWali Golf Club.His score for three rounds was 223.Fakhar Imam of Defence Raya Golf Club came second with a similar score of 223 but the first prize tilted in favour of Robin because he had a better score on the last 36 holes.Net section performers were Ahmed Khalid (first),SardarMurad Khan(second) and Mohsen Zafar (third). Ghazala Yasmin won the ladies gross and Ana James Gill was runners up gross.In net section Zaib un Nisa won first net and Sameea JavedAli ,the runners up net. The veteran section winner was Inam Rana with Maj U.D.Najmi second..Javed A.Zia was first in net and Gp Capt Asim Durrani second.Air Cmdr Z.I.Ahmed came first in gross section of age category above 80 years.Dr Ehsanullah was first in net section of this age group.

Senior gross was won by Shafiq Bhatti and second gross went to Javed A.Khan.Senior net went to Talha Majeed and 2nd net to Omer Farooq. A wonderfully well organised championship on a great  golf course and support of J.A.Zaman Family.Hamid Zaman committed that the prize money next year will be further enhanced and so will be the prestige of this championship making it the best one of the golf calendar. In a grand prize distribution ceremony the prizes were awarded to the winners by Begum J.A.Zaman and Hamid Zaman.