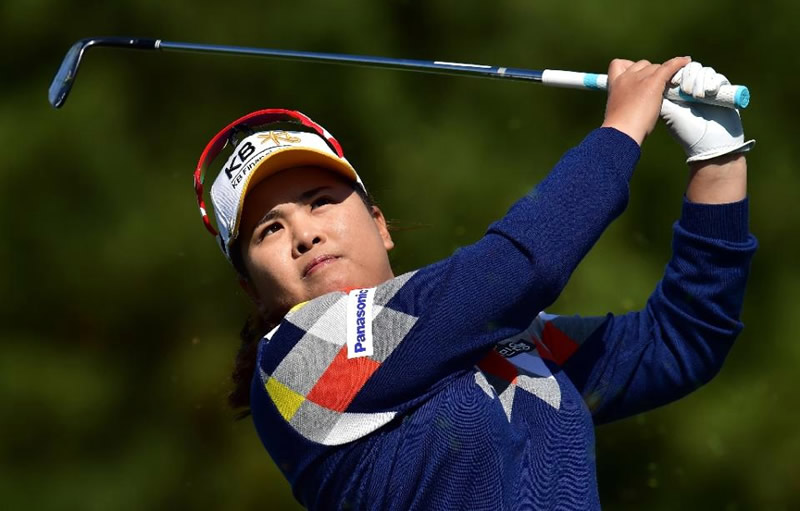 A last-gasp birdie kept Park In-Bee on top at the HSBC Women s Champions on Friday as world number one Lydia Ko fought through one of the “craziest” rounds of her life.

Park, demoted to second in the world by Ko, 17, was trailing Spain s Carlota Ciganda by a stroke heading into the 18th but she holed her third birdie to retain the joint lead.

The pair were tied on 135 over two rounds at par-72 Sentosa Golf Club after Ciganda s sizzling six-under-par 66 and 69 for Park, who also led the first day alongside Tseng Ya-ni. “I think birdieing 18 is very important for the next day. Usually it gives me a good confidence going into tomorrow,” said Park, 26, who is yet to card a bogey. Ko, affected by jetlag and Singapore s tropical heat during her opening round of 68, fought back from a double-bogey on the par-four 13th to score 70 for 138 and a share of fourth. In a rollercoaster round, Ko s double erased her two earlier birdies and she finished birdie, bogey, birdie, birdie to lie three shots off the pace. “It was one of the craziest rounds in my life, and I don t think I should go too much in detail about it,” said the New Zealander. Despite her unhappiness, Ko, the youngest number one in golf s history, remains firmly in contention for her third straight win after the Australian Open and New Zealand Open.

The teenager is in illustrious company as she shares fourth with three former Women s Champions winners: Karrie Webb, Shin Jiyai and Stacy Lewis. Spain s Azahara Munoz fired 67 to lie alone in third, a year after she was beaten in a play-off by Paula Creamer s monstrous 75-foot (23 metres) putt for victory. Ciganda, 24, said the presence of her father had been a plus as she shot to the top of the leaderboard and raised the prospect of her first victory on the LPGA Tour. “He s been a really good influence to me my whole life and when he comes he s very positive and when I m playing good,” said the Spaniard. “He s always telling me to have fun out there, to enjoy playing golf.” But it was a day to forget for Taiwan s former world number one Tseng. The joint overnight leader managed only three-over 75, slipping to a tie of 17th at the halfway point.

Head of Seminary, 2 Others Convicted in Rape Case