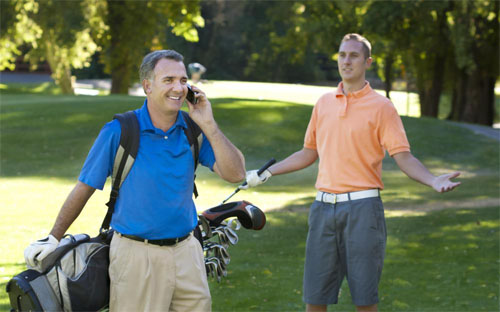 Etiqutte is the tern used for the code of conduct on the golf course. it is only mentioned briefly in the official rule book and largely comprises unwritten laws.

As opposed to the rules of play, the etiquette does not regulate the game itself but how golfers are treat the course and each other. The most imprtant objectives are

1) Safety/Prevention of accidents
2) care and maintenance of the course
3) Fairness, courtesy and politeness
40 Ideal pace Of Play

Althought the same coad of conduct applies on most courses, every club is basically allowed to modify the stipulations or draw up additional ones. To a certain extent, the etiqutte can therefore be viewed as the club’s house rules. The Stipulations that apply are listed on the notice board or on the back of the score card.
The particular significance of the etiqutte and its importance in preventing accidents requires its stipulations to be followed by everyone, at all times, Whether you are playing a friendly game or in a competiton, along with friends or with strangers, the etiquette should always be complied with.
Even the best of results is no wxcuse for improper behavier. [contentblock id=2 img=adsense.png]

penalty strokes are not imposed for breaches of the etiquette but the will result in angry looks and reprimands from fellow-players. The committee can also issue cautiions. In the case of particularly serious breaches, it is possible to disqualify a player or bar them from the course entirely.

Knowledge Of the Rules:

It is assumed that every player has sound knowledge of the rules of play. Complying with the rules and counting strokes and penalty strokes honestly, even if other players haven not noticed anything, is part of the ” Spirit Of Golf”. Cheating is definitely taboo. As it is impossible to remember all the rules off by heart, no one will think badly of you if you ask your fellow players for advice or look up something in the rule book if you need to.Point out breaches of the rules immediately.

Charitably overlooking them is not the correct way to proceed and would also be a breach of them rules in itself. Incidentally, it is advisable to play in accordance with the rules during friendly rounds as well so that you are not suddenly confronted with a totally new situation in a competition. Summary Always conduct yourself in the way that you would like other players to conduct the selves and leave the ciurse in the condition that you would like to find it in. This not only applies to your home club but should also be the norm at other coureses too.