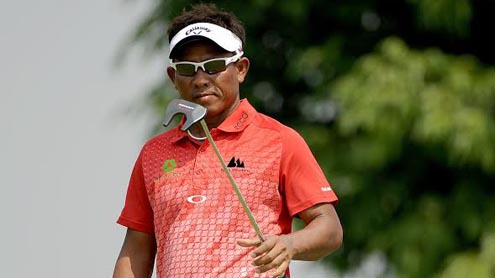 A stellar Asian Tour cast which consists of five Order of Merit champions, eight of the current top-10 players on the rankings and 48 Tour champions will gather at the prestigious Thailand Golf Championship next week.

Home stars Thongchai Jaidee, the only man to win three merit crowns and named this week as Asian captain for the inaugural EurAsia Cup presented by DRB-HICOM against Europe, and Kiradech Aphibarnrat, the current number one, will be amongst the star attractions at Amata Spring Country Club from December 12 to 15.

India’s Jeev Milkha Singh, Filipino Juvic Pagunsan, China’s Liang Wen-chong and India’s Jyoti Randhawa are the other former Asian Tour number ones who will tee up in Amata Spring eager to improve on their chances to make the Asian Team to face Europe for the EurAsia Cup in Malaysia next March. All eyes will be on the 24-year-old Kiradech, who is poised to win the Asian Tour’s Order of Merit after accumulating over US$1.1 million in winnings this season, thanks to a victory at the Maybank Malaysian Open and five other top-five finishes. He also finished tied fifth at the ISPS HANDA World Cup of Golf in Melbourne last month.

A return to the magnificent Amata Spring layout will bring back happy memories for the big Thai as he won the British Open International Final Qualifying (IFQ) in March at the same venue, shooting a final round 63, and was also tied sixth in last year’s Thailand Golf Championship. “I have had a lot of opportunities to play at Amata Spring Country Club so I know the course quite well. The course suits long hitters and that’s why I play quite well there. I am quite happy with my form and with the way I am striking the ball, if I focus on my putting, I will have a good chance of finishing at the top,” said Kiradech, whose two Asian Tour wins have been won in India and Malaysia.

“I’d love to go back to play in our country. We only get to play at home once or twice a year and I would like to try and win the tournament in front of my family and fans.” With his long-hitting game, back-in-form Gaganjeet Bhullar of India, who is fourth on the Merit rankings, could well feature prominently against the international stars. He claimed a fifth career victory at the Indonesia Open last week after finishing last at the World Cup.

“I wanted to prove to myself that I can still play well. I believed in myself. Mentally, I was ready to win. Golf is a funny game. I just felt I was ready to take up the best players out here. My ball striking is good. I knew the win will come soon,” said Bhullar. Other tournaments winners this season who will headline the Thailand Golf Championship include India’s Anirban Lahiri, China’s Liang, Thailand’s Prayad Marksaeng and Pariya Junhasavasdikul, Chinese Taipei’s Lin Wen-tang and Australian Wade Ormsby.

The Asian Tour is the official sanctioning body for professional golf in Asia.